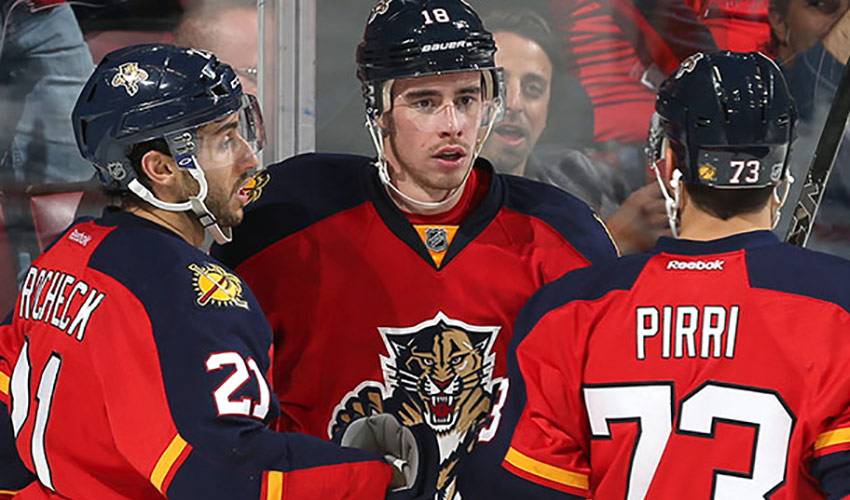 Reilly Smith has received an abundance of sage advice throughout his hockey career. But, as he’s discovered from playing alongside one of the game’s bona fide greats, it’s not just words of wisdom that can be a difference maker.

Throughout his time in the game, from the Ontario Hockey League ranks, to the U.S. collegiate scene, to skating on the NHL stage, the 24-year-old Smith has been the beneficiary of sound guidance.

So, when he happened to find himself wearing the same sweater as the fourth highest points leader in NHL history, the Ontario native wasn’t about to pass up any opportunity to learn from the future Hall of Famer.

While Smith has incorporated several things into his game that he’s learned from Jaromir Jagr (now third on the all-time goals list), some of the most impactful knowledge he’s culled has come from observing the 44-year-old’s preparedness to play.

“Jaromir has an abundance of knowledge about the game on the ice,” said Smith, of the two-time Stanley Cup winner and three-time Ted Lindsay Award recipient, whose just five points back (1,850-1,845) of Gordie Howe for third on the all-time points list. “But the best advice I have picked up from him is his tireless efforts off the ice to constantly work to improve his game.”

It’s a big reason why Smith, whose older brother Brendan plays for the Detroit Red Wings, has thrived in his first season in Florida.

In 59 games, the former Dallas and Boston forward has 19 goals and 36 points.

“Florida’s been a great fit because the leadership abilities of our veteran players really complements the development of the large group of younger players,” offered Smith.

The Panthers find themselves in the upper echelon of the Eastern Conference standings, seeking a return to the post-season scene after three consecutive campaigns missing the cut.

Smith is looking forward to the opportunity to add to the dozen NHL playoff games (all with Boston) that he’s played in.

He’s also looking back at what he learned during his time at Miami University, where he recorded 122 points in 121 lifetime games with the RedHawks, to remind himself of what helped net him an NHL career.

“Miami U was great for me,” offered Smith. “It gave me the necessary extra couple years to mature physically before trying to make the jump to professional hockey. It also added a lot of structure to my game. I was given an abundance of opportunity to build my skill and confidence during my three years in Oxford (Ohio).”