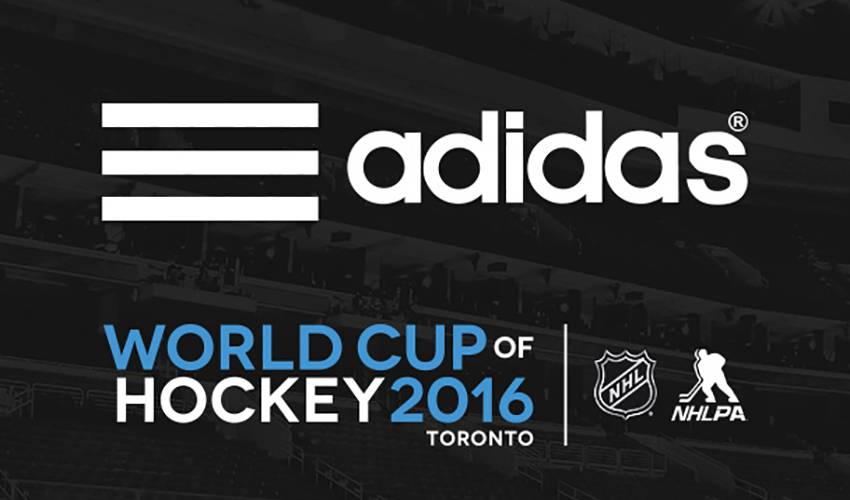 The World Cup of Hockey 2016 features the following eight international teams: Canada, Czech Republic, Finland, Russia, Sweden, USA, Europe and North America. Each team’s jersey design is inspired by essential elements of national pride from the participating teams. Together, the jerseys create a unified vision of global hockey and will be available for purchase beginning in August.

“We took iconic emblems from each of the participating teams to create jerseys that honor the traditions of each nation and fused those with an emphasis on technical design for elite performance on the ice,” said Keith Leach, Sr. Director NHL, the adidas Group. “adidas is committed to designing and developing high-performance products that make athletes better and we look forward to outfitting the World Cup of Hockey in our newest and most innovative uniforms.”

“The design and development of the World Cup of Hockey uniforms was a true collaboration between adidas, the NHL and the NHLPA, with important input provided by each participating team,” said Brian Jennings, NHL CMO & Executive Vice President. “The best hockey players in the world require the best innovation in uniforms. It was imperative that the uniforms not only feature the best in performance wear but also creatively showcase modern interpretations of each country's rich history.”

“Players are always excited to wear their national colors on the international stage and these adidas uniforms certainly continue that tradition,” said NHLPA Special Assistant to the Executive Director, Mathieu Schneider. “In these unique World Cup of Hockey 2016 jerseys, the game’s greatest players will add another chapter to hockey’s international story.”

Made with adidas’ cutting-edge adizero technology, the new uniform features the blending of three lightweight, resilient fabrics, which have been tested and tuned over the past four years. Engineered for durability, while providing greater airflow, the innovative adizero fabric has been developed to keep athletes cool and comfortable. Additionally, the new adizero cresting reduces weight, adds flexibility and improves overall movement, allowing players to perform at their highest levels.

Development and construction of the lightweight jersey has been refined to minimize nonessential elements including seams, piping and others that add weight to the jersey. Additionally, the collar has been designed to be more robust and durable and the lay-flat construction allows a better range of motion while simultaneously creating a clean look.

Canada – Celebrating the designation as the host team for the World Cup of Hockey 2016, Canada’s uniforms recall a modern interpretation of the national icon—the maple leaf. The motif wraps each sleeve, creating a visual with a direct connection to a crowning era in Canada’s hockey heritage. The three veins contained in the Dominion Leaf crest represent Canada’s three coasts and make this a mark to represent all of the Great North.

USA – Building upon a tradition befitting the land of the free and home of the brave, the USA uniform features bold striping inspired by service uniforms that creates a distinct yet cohesive visual across the uniforms. National emblems and banners inspire an unapologetic shield and word mark.

Finland – Paying homage to heritage, the Finland uniform design honors the bold Nordic cross of the Finnish flag. Reflecting the spirit of Suomi, the crests feature the national coat of arms with its crowned lion.

Czech Republic – The Czech Republic’s uniform seizes upon the boldness of national emblems and banners. The statement color blocking highlights the coat of arms, a silver double-tailed Lion crest representing all of the Republic.

Europe – Signifying a united Europe, the players’ countries are all represented by a modern E shield, featuring a single crest that connects all of their home nations. Players wear their flag on their shoulder and the names of each European nation in the unity stripe across their sleeve. A continental blue color scheme highlights harmony on a unified team.

North America – The North America team is a group of young talented phenoms who will play in black and white under an inclusive badge of brotherhood. The crest and uniform feature highlights of beacon red, signaling the high energy these stars bring to the ice. This uniform admits the wearer to the exclusive club of the next generation.

World Cup of Hockey 2016 uniform imagery is available to the media for editorial use at mediaassets.wch2016.com.

For more information and images of the new adidas hockey uniforms, please visit http://news.adidas.com/US and follow the conversation on Twitter and Instagram via @adidas, @adidasUS, @adidasca, @NHLand https://www.facebook.com/adidas/ #WCH2016.