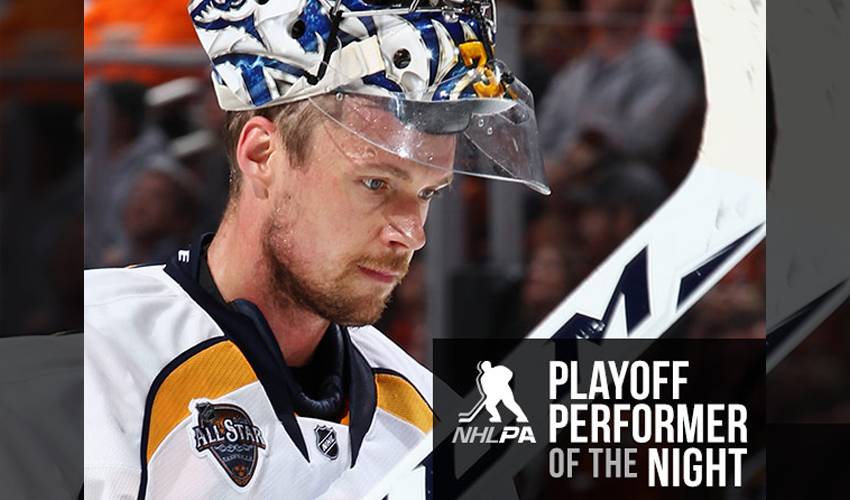 The Finnish veteran was a force throughout the deciding contest, playing a big part in sending the Predators into the Western Conference second round where they’ll face San Jose.

STAT PACK: Rinne stopped 36 of 37 shots, allowing only a power-play marker in the third. He faced 28 shots over the final two frames, and finished the game with a .973 save percentage en route to First Star status.

CHARACTER WIN: “It means a lot, and it shows a lot of character,” offered Rinne. “We can learn from this series. It's a really good team we played against, and there are a lot of good things we can take. Moving forward, I think we're a better team already.”

DUCK DYNASTY?: Rinne, who also helped the Predators eliminate Anaheim in the 2011 Conference Quarterfinals, improved to 8-5 in 13 all-time playoff meetings against the club. He owns a 12-5-4 record in 21 career regular-season contests vs. Anaheim (2.29 GAA, .919 save percentage, 2 shutouts).

HELPING HAND: The 33-year-old works with Best Buddies of Tennessee, who creates opportunities and friendships for people with intellectual and developmental disabilities.

A NOVEL ACE: Rinne’s hobbies include reading and tennis.

FINNISH-ING TOUCHES: His most memorable hockey moments include winning a pair of Finnish League titles (2004-05) and playing in the Calder Cup Finals (2006).

HONOURABLE MENTIONS: Shane Prince had two goals, John Tavares recorded one tally and one helper, and Brock Nelson chipped in with two assists, as the New York Islanders defeated Tampa Bay 5-3 in Game 1 of their Eastern Conference semifinal.