The Hat Fits For Oshie in Game 1

The Capitals forward notched a hat-trick, including the OT winner, as Washington claimed a Game 1 victory 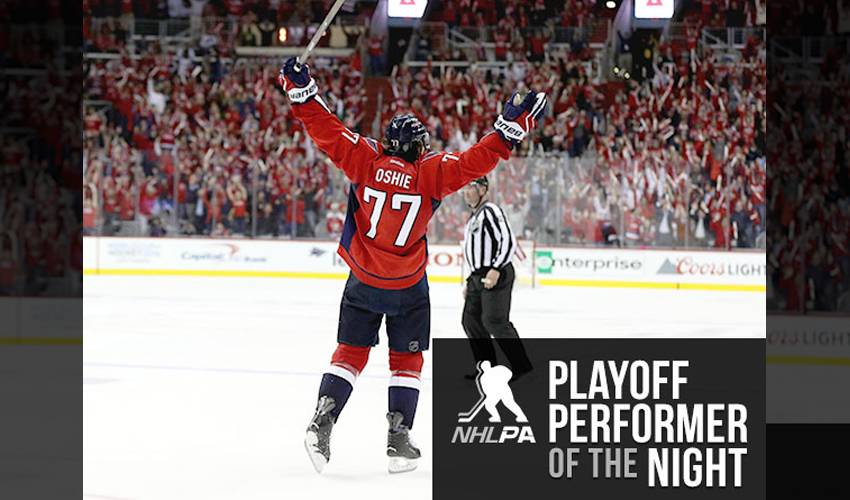 The right-winger is scoring at a point-per-game clip in the 2016 postseason, providing the Caps with plenty of offensive punch as they look to net their first Stanley Cup.

CHILD’S PLAY: “That's kind of the stuff you dream about when you're a kid playing in the backyard by yourself is scoring the OT winner and getting a hat trick," Oshie said. "It was awesome. Great way to win.”

THE MOST WONDERFUL TIME OF THE YEAR: “The momentum shifts, the big hits, the goals, overtime, the big saves: This is what the playoffs are all about,” offered Oshie.

DARE TO COMPARE?: Another big highlight for Oshie came when he scored the shootout winner for the U.S. against Russia at the 2014 Sochi Olympics. “That was the Olympics wearing the USA jersey – I don't know if I want to rate them, but it's up there,” he said. “The puck just went in. It usually doesn't, I guess. I was getting some opportunities and throwing the puck there more than I usually did.”

GOOD THINGS COME IN THREES: Oshie became the first player to record a postseason hat trick that included an overtime goal since June 8, 2013, when Blackhawks forward Patrick Kane did so in the team’s series-clinching win over the Kings in Game 5 of the Western Conference Final.

EIGHT IS ALSO GREAT: He recorded the eighth playoff hat trick in Capitals history and first since April 17, 2010, when Nicklas Backstrom also completed the feat in overtime in the team’s Game 2 victory against the Canadiens in the Eastern Conference Quarterfinals.

MAKING HIS POINTS: Oshie, who scored his first career playoff overtime goal, posted his second multi-goal game in the postseason. The other came on May 6, 2013 at Los Angeles (2-0-2, with St Louis).

THE GREENS SCENE: In 2014, Oshie received an invitation to attend the prestigious PGA Championship and sat at a table for the Champions Dinner that included 2013 PGA championship winner Jason Dufner and golf legend Phil Mickelson. “I’m not turned into a fan very often, but with golf, it’s a different story,” said Oshie, who played varsity golf in high school in Minnesota. “Every weekend, I’m watching on TV. When they are making that walk down 18 on Sunday, I’m tuned in.”

GOLF CAN WAIT: “I don’t mind getting out on the golf course,” said Oshie. “But, I’d prefer the first chance I’d have would come at the end of June. That would be a great way to start the summer.”

TEARS, THEN TEARS OF JOY: The viral video of a young Oshie fan sobbing after he was traded from St. Louis to Washington resulted in the forward sending the girl, Libby Lu, a care package (including a signed jersey), calling her when she was on Sports Center, and meeting her and her family when he returned to play in St. Louis for the first time.

HONOURABLE MENTIONS: Nick Bonino had a goal and an assist for the Penguins, while Carl Hagelin had two helpers. Andre Burakovsky had the other goal for the Caps.