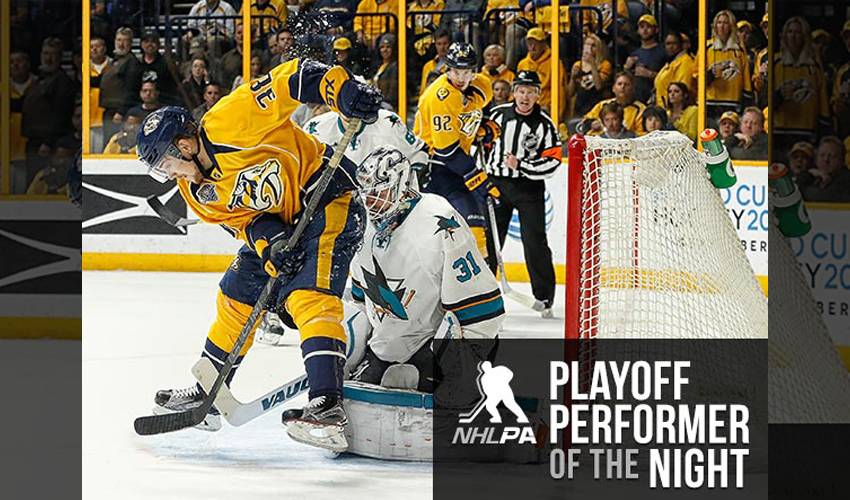 The right-winger scored at 2:03 of the extra frame to deliver the Preds a 4-3 victory on home ice.

SEEING IS BELIEVING?: “Unbelievable,” said Arvidsson. “I didn't see it go in at first. The crowd went crazy, and I just didn't know what to do. It was really nice.”

EARLY TO BED: “That was the second-most exciting part of him scoring was that it was in the first three minutes,” said Colin Wilson. “We get to get to bed at a regular time. It's big to get that out of the way early. I'm happy for Arvy.”

BENCH BOSS PRAISE: “He's such a fun player to watch,” said Nashville head coach Peter Laviolette. “He got some speed behind him in the neutral zone. He was able to turn it over and get an angle to get a shot off. It was a great shot.”

ONE TO REMEMBER: Arvidsson became the first player in franchise history to register his first career playoff goal in overtime.

HIGH FIVE: He tied with 2011 No. 1 overall pick Ryan Nugent-Hopkins for the 2010 Ivan Hlinka Memorial Tournament lead in goals (5).

HONOURABLE MENTIONS: Colin Wilson and Ryan Johansen each had a goal for the Predators. Chris Tierney had two goals for San Jose, while Brent Burns chipped in with two assists. Kari Lehtonen had 35 saves for Dallas in their 3-2 win in Game 6 against St. Louis. Colton Sceviour had two assists for the Stars.