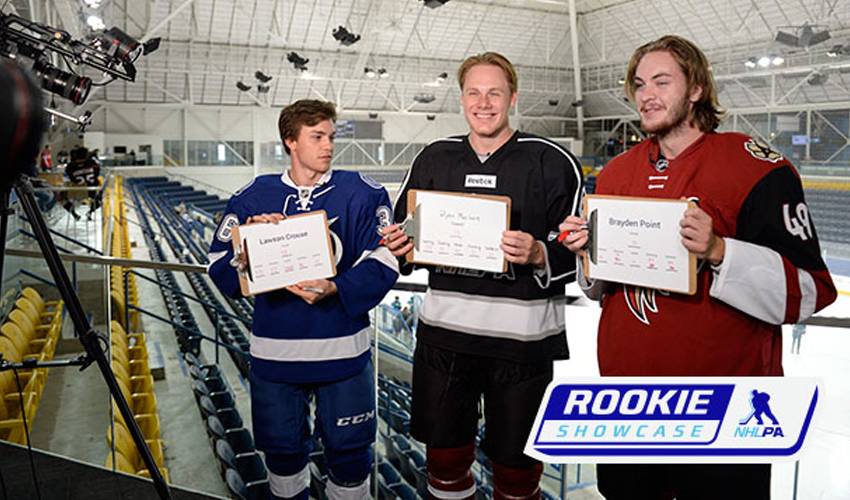 Now in its eighth year, another National Hockey League Players’ Association Rookie Showcase is in the books.

A group of 27 NHL rookies and prospects took to the Mattamy Athletic Centre – site of the former Maple Leaf Gardens - on Monday for the event. The showcase provides Upper Deck, the official trading card partner of the NHLPA and the NHL, the unique opportunity to photograph and film many of the game’s top young talent in their official NHL uniforms.

The Players who took part in the Rookie Showcase are either projected to make their NHL debut in 2016-17, or debuted late in the 2015-16 season. Regardless, everyone who hit the ice in Toronto on Monday will see their first rookie cards in this year’s sets.

Some like Lawson Crouse, who was traded to the Arizona Coyotes less than a week ago, donned their team sweater for the first time.

Eyes were also on a few famed retired NHLers' sons – Matthew Tkachuk (Keith) of the Calgary Flames, and Ryan MacInnis (Al) of the Arizona Coyotes.


Upper Deck had a variety of stations set up for the players to rotate through over the course of the day, including both on and off-ice photo shoots. The players suited up in their NHL team uniforms and were photographed for both still and action shots that will be used on some of their very first trading cards. Those cards will go to print in Upper Deck hockey card sets that follow the rookies playing in their first NHL games.

EA Sports also had a station set up for the players to take their best guess at their own player ratings for future installments of the NHL video game series.

The group also got to bring their competitive nature off the ice and onto a few tables - some lucky passersby even got in on the action and won some serious bragging rights at the expense of San Jose Sharks' prospect Timo Meier.

The on-ice portion of the event wrapped up with a friendly scrimmage where the Rookies were split into two teams, a scenario that produced a number of highlight-reel goals and plays. The day concluded with the Players heading to The Ballroom in Toronto's Entertainment District for a delicious dinner with a side of bowling.

For a full look at some of the moments captured at the 2016 NHLPA Rookie Showcase, check out #NHLPARookieShowcase across your social feeds.