Jussi Jokinen has plenty of praise for the way former teammate and current Team Finland GM Jere Lehtinen played the game. Turns out, the feeling’s mutual. 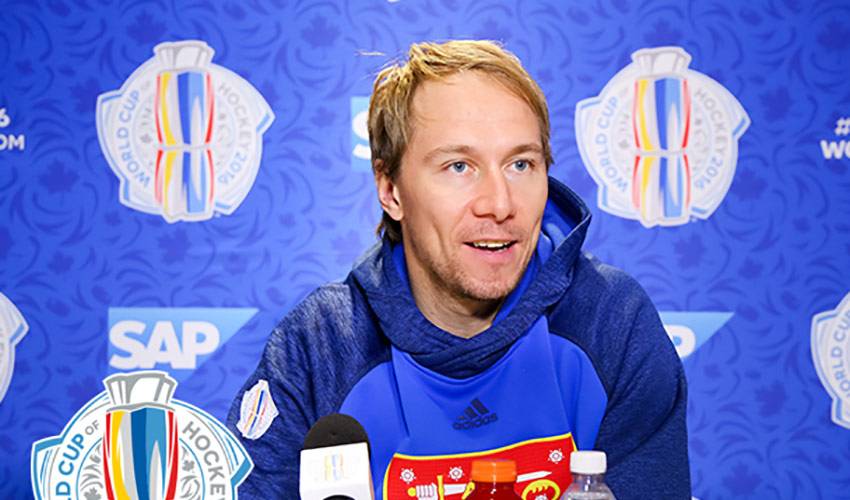 Jussi Jokinen has plenty of praise for the way former teammate and current Team Finland GM Jere Lehtinen played the game. Turns out, the feeling’s mutual.

They played for two-plus seasons with the Dallas Stars, from 2005-08, one a revered veteran with three Frank Selke Awards and a Stanley Cup to his name, the other a respected up-and-comer with a willingness to learn.

“I really looked up to Jere,” recalled Jokinen. “He was one of my idols. The way he played the game – his ability to be strong both offensively and defensively – you learned a lot just from watching him.”

On February 26, 2008, Jokinen was dealt to the Tampa Bay Lightning. Since then, he’s suited up for Carolina, Pittsburgh and currently patrols left wing for Florida, where he’s an alternate captain.

Lehtinen went on to skate in 875 regular season NHL games, all with Dallas, the right-winger calling it a career on December 8, 2010.

They were teammates on the Finnish entry at the 2006 Winter Olympics. Lehtinen contributed three goals and eight points, while Jokinen tallied one goal and four points.

The duo has been reunited, so to speak, for this year’s World Cup of Hockey, Lehtinen in the GM role, Jokinen as one of 13 forwards.

“He was ready to play in the NHL right from the first year,” recalled Lehtinen. “He wanted to take his spot and keep it. That’s how he is.”

Jokinen will be relied on heavily, both on the ice and as a leader, when the puck drops on the World Cup. Finland takes on North America in their first round-robin game on September 18.

“He brings leadership and a lot of experience,” praised Lehtinen. “You can put him in any situation, power-play, penalty kill. He is at his best when the game is on the line.”

Those words very easily could be applied to Lehtinen.

“He was such a great all-round player,” noted Jokinen. “He could make plays at both ends of the ice that could change a game.”

While Finland might be flying under the radar when it comes to medalling at the World Cup, Jokinen is embracing the dark horse status.

“It fits well to be the underdog,” he said. “We have won medals at the last three Olympics (one silver and two bronze), a silver at this year’s World Championship, and the men’s junior team won gold this year. We’re a small country compared to a lot of others, but we find a way to come up big. You always feel the whole nation is behind us.”

Jokinen, known for his shoot-out prowess, also has a familiar face in his corner.

“He is a good overall player and plays smart,” offered Lehtinen. “He does a lot of little things right. He never gives up and is really determined in how he approaches hockey. Of course, you can’t forget his shoot-outs.”