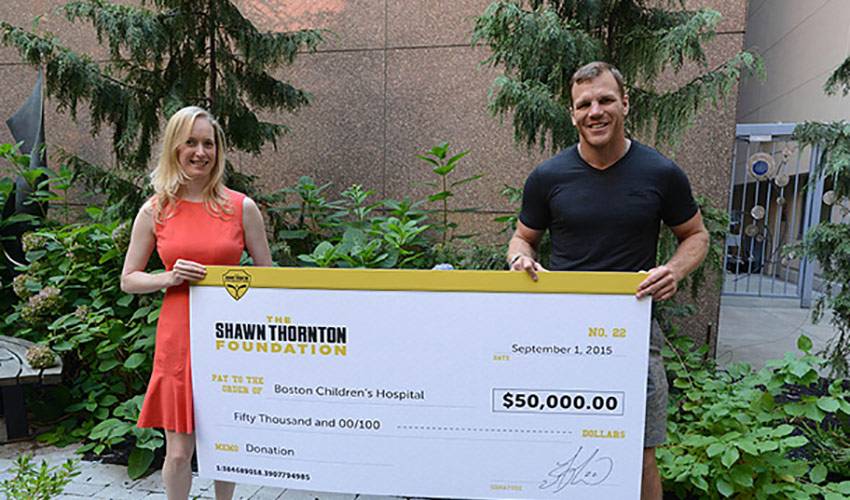 It never hurts to have someone like Shawn Thornton in your corner.

For as long as he’s played the NHL game – starting with 13 games in 2002-03 with Chicago – the rugged right-winger from Ontario has always answered the bell when it comes to taking care of his teammates.

The same can also be said of Thornton away from hockey. Hundreds of hospital visits, an unwavering commitment to community and a foundation established in 2013 that bears his name – the 39-year-old is dedicated to making a difference in the lives of others.

“People say it all the time, but when you walk into a hospital room and see someone battling a life-threatening disease or illness, it puts everything into perspective in a split-second,” said Thornton, who will start his third season with the Florida Panthers after seven years with the Boston Bruins. “I can remember a lot of times coming home after one of those visits and talking to my wife about it, just how it affects you. And it does.”

A decade ago, Thornton, during his time in Boston, mulled over ideas as to how he could best give back to the community. After weighing several options, he landed on a charity golf tournament.

The foundation has since been launched, and now entering its fourth year, raises funds and awareness for Parkinson’s disease and cancer.

“My grandmother had Parkinson’s, so it’s something that I have a personal attachment to,” he said. “When it comes to cancer, seeing anyone struggle with something of that magnitude makes you want to help in any way you can.”

Foundation events include the Putts & Punches for Parkinson’s Golf Tournament, the Falmouth Road Race, and the Shawn Thornton Foundation Marathon Team (over $43,000 was raised at this year’s Boston Marathon), that all take place in Massachusetts.

Thornton is looking to possibly bring something similar to Florida in the coming years.

“Since I’m starting my third season here, and we’ve gotten to know more people and become part of the community, it would be great if we could do something here as well,” he said. ‘To see it grow to what it is, it’s bigger than I ever could have imagined. I think one of the most rewarding parts of the actual events we have for the foundation is that people keep coming back. It’s been very well received and you’re grateful for that.”

He also gets a huge assist from those who sit on the foundation’s board of directors.

“We have a lot of wonderful sponsors and people that work tirelessly for the foundation,” said Thornton, who has won the Stanley Cup with Anaheim and Boston. “They all volunteer their time and energy to this. They have busy lives, in and out of the workplace, but they are 100 per cent dedicated and driven to help out. I’m completely spoiled to have these people be part of it.”

The foundation is far from Thornton’s only vehicle for helping others.

He sits on the board for several charitable events and is a spokesperson for Athletes for Heroes, a program that supports the children of fallen or severely injured soldiers.

Seven years ago, he received the John P. Bucyk Award that honours the Bruins player who has contributed the most to charitable and community endeavours.

“Any chance you have to give back, you just do it,” said Thornton.

There are hundreds of people that are grateful he does.

For more on the foundation, visit: http://www.thorntonfoundation.org