There are two important things to know about speedy Montreal forward Paul Byron: his quickness isn’t enhanced by any equipment modifications, and his pumpkin-artistry skills are average at best. 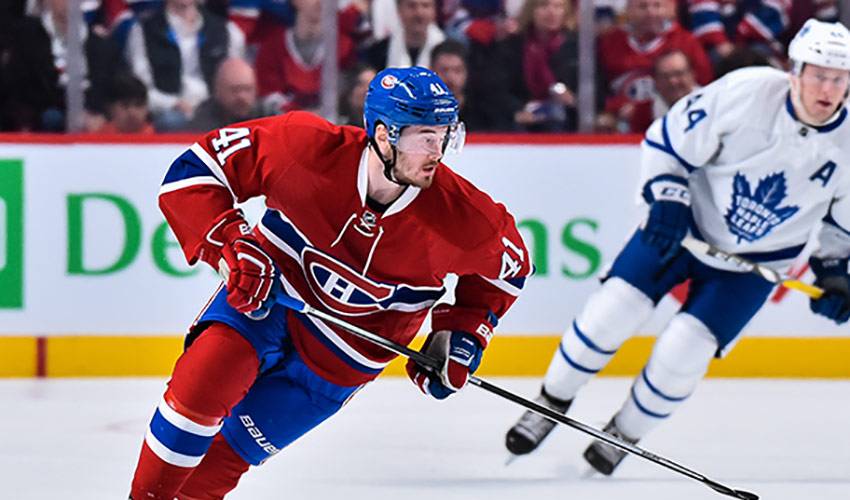 There are two important things to know about speedy Montreal forward Paul Byron: his quickness isn’t enhanced by any equipment modifications, and his pumpkin-artistry skills are average at best.

“You can probably hear it in the background, but it’s Halloween decorating time,” said Byron. “I can carve the pumpkins pretty well, but when it comes to the drawing and design part, I’m not that great. But, we’re getting everything ready and the kids (he and his wife Sarah have a son and a daughter) are pretty excited.”

Byron is feeling pretty good, too, one day removed from Montreal’s hard-fought 2-1 win over rival Toronto.

The 27-year-old didn’t hit the scoresheet in 15:21 of ice time against the Maple Leafs, but the swift-skating left-winger used his hallmark speed to help the League-leading Habs notch two points on home ice.

Byron has been a solid contributor at both ends of the ice this season, something that hasn’t gone unnoticed by his teammates, who occasionally rib him about his fleet of foot ways.

“The guys will ask me if my skates are legal or if I have something going on,” he said with a laugh. “They’ve all been great to me. It’s an excellent group of guys where everyone wants to see everybody succeed.”

Byron’s success story with the Canadiens has been a welcome one for both team and player.

In early October of 2015, Montreal picked up the former Quebec Major Junior Hockey League star via waivers from Calgary. Four months later, Byron signed a three-year contract with the Habs.

“Coming to a new team, you don’t always know how things will unfold, but Montreal made me feel welcome right from the start,” said the 179th overall pick by Buffalo in 2007. “That counts for a lot. Signing the contract – as player, that gives you peace of mind. But it’s not something that makes you complacent. It makes you want to be the best player you can be.”

After 10 games he has two goals, including a game winner, and three assists, while averaging 13:11 minutes of ice time. He also has five blocks and six takeaways.

Just why has it worked out so well for Byron?

“The way the team plays,” he offered. “It’s a fast, attacking game, where I can use my speed. I think the system really suits my playing style and the coaching staff has put me in situations where I can succeed.”

Byron’s quickness remains the cornerstone of his contributions.

It’s also something Canadiens fans likely mention when they see him outside of the Bell Centre.

“More than I’ve ever been before,” said Byron of being recognized by supporters of the bleu, blanc et rouge. “Maybe not as much as Shea (Weber), Carey (Price) or Patch (Max Pacioretty), but people certainly do notice you when you’re out in the city.”

Those fan interactions are likely one of the very few occasions when Byron actually slows things down, at least for a moment.