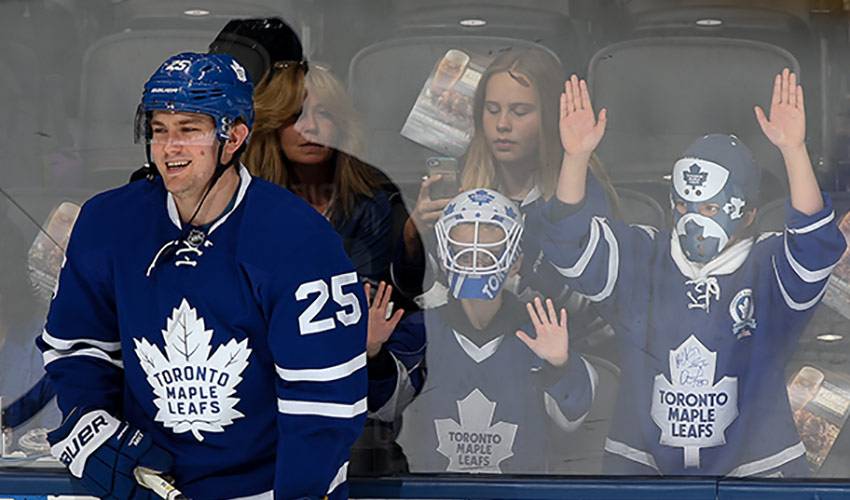 There is an ease and genuineness in how 27-year-old van Riemsdyk interacts with the hundreds of parents and kids he’s met over the course of his NHL career through Autism Speaks, the world’s leading autism advocacy organization.

Working closely with Autism Speaks continues to be an important part of the New Jersey native’s life, a relationship that dates back to his early NHL days. He also supports other endeavors, including his work with the military and cystic fibrosis charities.

“It started when I was in Philly and I wanted to get more involved in the community,” said van Riemsdyk, now in his fifth season with the Maple Leafs after being dealt by the Flyers on June 23, 2012. “I had a box the last year I was there called JVR’s MVPs. We had some people come out for every home game, whether it was autism-related charities or supporting our military. When I got to Toronto, I was fortunate enough to be able to do the same thing, having that chance to work with the people at Autism Speaks.”

He also has personal connection to autism. Two cousins – who happen to be huge hockey fans – have autism spectrum disorder, as does a friend from van Riemsdyk’s middle school days.

“With some family having kids who are on the spectrum, you understand the dedication that it takes for the parents – it’s really hard to put into words what they do and what it takes on a daily basis – to ensure their children are happy.”

And happy is what van Riemsdyk sees throughout the hockey season whenever he meets families affected by autism.

Figuring out who derives more enjoyment from it is a toss-up.

“It’s a chance for the families to come out and enjoy the game in a little bit more comfortable setting,” said van Riemsdyk. “It’s great to meet all of those people and to see the excitement on the kids’ faces when they’re at the game or when they come down to the locker room after the game. It’s pretty cool. They’re just so thrilled to be at the games.”

Having the platform of being a professional hockey player no doubt helps van Riemsdyk draw more attention to autism.

For that, he is truly grateful.

“It’s one of the great things that we get to do because of what we do,” he offered. “To have that chance to get involved, whatever the initiative it is, we’re able to show what causes we’re passionate about and find ways to shine the light on them. It keeps everything in perspective and it reminds us of how fortunate we are to play the game we love.”

Even if he weren’t in the sporting spotlight, van Riemsdyk would still gladly lend his efforts to getting the word out about autism awareness.