It’s a sound that initially took Cam Atkinson by surprise. And although there are times it still does catch him off guard, one of Columbus’ offensive catalysts will tell you it’s always music to his ears. 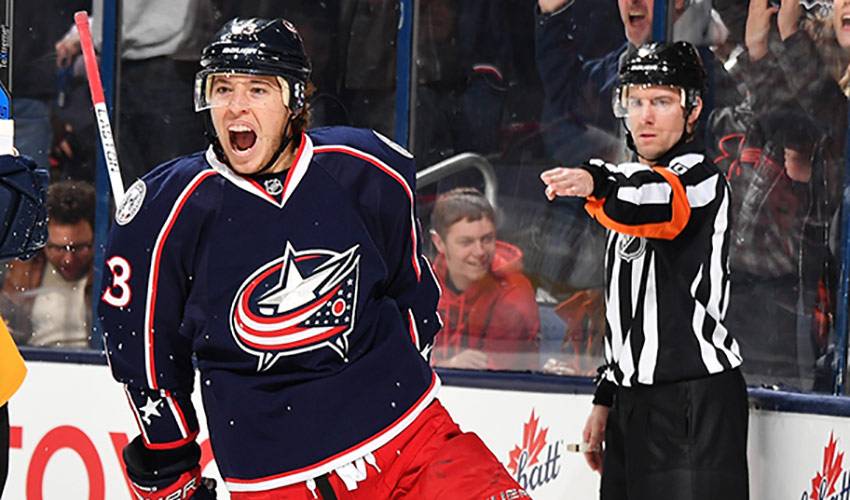 It’s a sound that initially took Cam Atkinson by surprise. And although there are times it still does catch him off guard, one of Columbus’ offensive catalysts will tell you it’s always music to his ears.

Atkinson knows just where it sits, section 111 at Nationwide Arena. And he knows just how loud it is whenever the Blue Jackets score.

The Blue Jackets goal cannon, which debuted on opening night of the 2007-08 NHL season, has become synonymous with the arena Columbus calls home.

For Atkinson, clicking at a shade over a point-per-game clip in 2016-2017, hearing the sound that emanates from the handcrafted piece of artillery - weighing in at 1,564 pounds – is certainly a pleasing one.

“To this day, it’s one of my favourite things to hear, even if it scares the heck out of me almost every time it goes off,” said the right-winger, who has reeled off three straight 20-goal seasons. “When I first got here, not knowing about it initially, it definitely surprises you.”

On occasion, it still does.

“There are still times – it goes off when we come out at the start of the game – that I sometimes forget,” said the 27-year-old. “And then there it goes. It certainly wakes you up. I’ve definitely seen it up close and personal several times. It’s pretty impressive. You don’t forget what it looks like and you definitely don’t forget what it sounds like."

Despite the odd jolt, Atkinson, who set a slew of career-high offensive marks last season, including goals (27), assists (26) and points (53), has embraced what the cannon represents.

As for his favourite hockey sight, that would be whenever he sees the red light come on behind the opposition’s net.

“There’s nothing better when that light goes on,” said Athkinson. “Whether it happens to be me or one of my teammates, it’s a great sight to see.”

As one of the league’s top-scoring teams this season, the Blue Jackets, sitting atop the overall standings, are quite familiar with seeing red, so to speak. They also happen to boast one of the stingiest defences, too.

After failing to qualify for the playoffs the past two campaigns, it’s a welcome position for the players to find themselves in.

“I think everyone just bought in to what Torts’ (head coach John Tortorella) game plan is from the get-go,” offered Atkinson. “It started at training camp and carried through. We came into this season expecting to win every night. Obviously, right off the hop, we wanted to show that.

“We wanted to have the respect of other teams and we had to go out and prove that we earned it,” he continued. “We worked hard to get to this point. It’s great when every guy contributes and that’s what we have. All four lines, our d-men, and obviously, our goalies, have played fantastic every night.”

It hasn’t escaped the attention of Blue Jackets fans – and not just at the rink.

“If you’re out for dinner or lunch – people definitely notice you more and more,” said Atkinson. “It’s a great sports city. They just want us to win. People are so friendly here. It’s definitely a great place to live.”

It’s also a place that’s home to some of Atkinson’s favourite sights and sounds.

“If I know you’re going to call me then, the phone is going on airplane mode,” he said with a laugh. “But, I really do like that sound.”