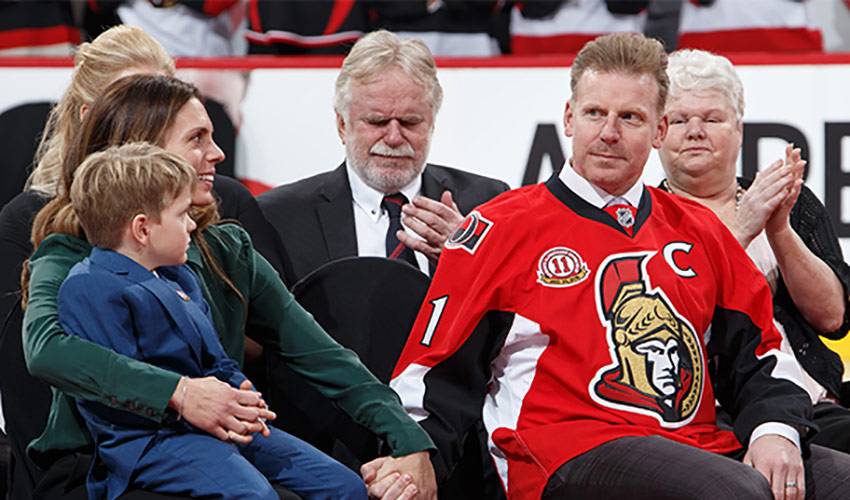 2016 was a big year for Daniel Alfredsson.

He became a Canadian citizen alongside 100 other new Canadians in a special swearing-in ceremony during the 2016 World Cup of Hockey, and closed out the year having his jersey retired by the team he dedicated 16 NHL seasons to - the Ottawa Senators.

Amid his jersey retirement ceremony, the Ottawa Senators announced, in partnership with the its Foundation, Bell Let’s Talk, and Carleton University, the establishment of a scholarship fund in Alfredsson’s name that will assist neuroscience and mental health students at Carleton University.

The Daniel Alfredsson Scholarship in Mental Health will be awarded annually to outstanding undergraduate students in the Neuroscience and Mental Health Program. The Ottawa Senators Foundation and Bell Let’s Talk donated $55,500 alongside Carleton University for a joint total of $111,000 towards the fund.

Some may recall the winger as the face of the Royal Ottawa’s “You Know Who I Am” campaign, which raised awareness to those affected by mental illness.

Alfredsson had this to say about the fund in a statement released by the Ottawa Senators:

“This is something very personal to me and a cause that I have been passionate about for a long time. To know that Carleton University has matched the funds provided by Bell Let’s Talk and the Ottawa Senators Foundation to establish a scholarship in my name that will assist the next generation of leaders in this field is a great honour to me.”

The legacy of the Swedish former captain affectionately known as Alfie, is forever undeniable as his name hangs from the rafters at Canadian Tire Centre, but it continues off the ice with his strong presence in the community.

Hats Off to Alfie