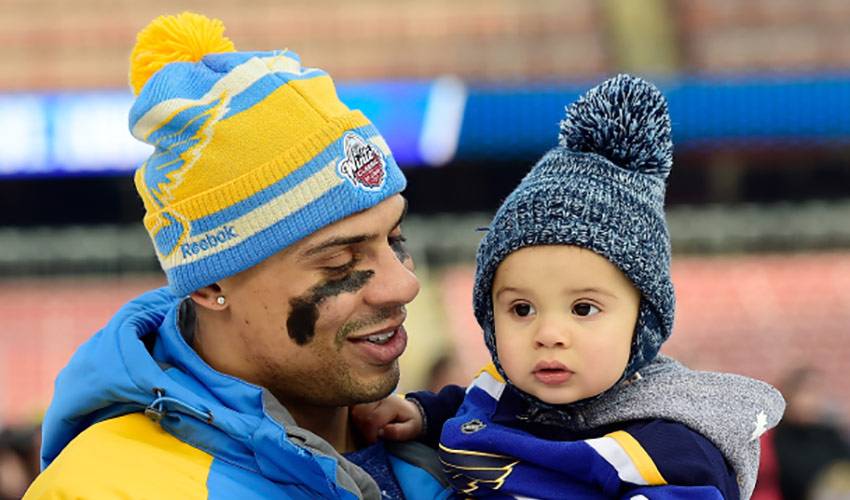 So, was he up for talking some football?

Minutes later, Reaves, the imposing 6’1”, 225-pounder who patrols the right wing for the St. Louis Blues, responds to the text, "Definitely!".

It’s certainly no surprise the 29-year-old is eager to talk about a game he certainly knows plenty about.

His father, Willard Reaves, a running back, was the Canadian Football League’s 1984 Most Outstanding Player honouree and a four-time all-star for the Winnipeg Blue Bombers, who also played in the NFL for the Miami Dolphins and Washington Redskins.

Ryan followed in his dad’s cleats as a star running back in Manitoba.

In fact, there was a time when the choice between pursuing a career in football or hockey was a toss-up.

Ryan, however, had his choice made for him.

“I played from eight right until high school,” said the Winnipeg native. “The year that you’re going to get drafted into junior (hockey), I was actually ranked No. 1 as a football player in Manitoba.

“I went to a little tournament that was for the players that were being drafted into junior and right after the very first game, we were shaking hands, and something happened,” Reaves continued. “For some reason, my knee locked up and I tore my PCL (posterior cruciate ligament).”

The timing couldn’t have been worse.

Hopeful of a chance to return to the gridiron, one conversation cemented what he already knew.

“I couldn’t play the whole football season and I ended up getting drafted into junior by Brandon,” remembered Reaves. “The coach, who was also the owner and the GM at the time, said, ‘Listen. I can’t have you playing football if you are going to come play for us. So, you have to make a decision.’ I was already missing the football season because of my knee, so that’s how I chose hockey.”

Still a big football fan, Reaves, every so often, will reminisce about his time on the field.

And while one might expect – based on his physical on-ice presence – that he was a bulldozing-type runner, eager to engage his opponents at any turn, it was quite the opposite.

Just like his father, Ryan relied on fancy footwork to be a game-changing performer.

“Believe it or not, I had some really nice dangles when I played,” Reaves said. “I was still really rough and I could also go through you, but it was definitely a lot different than my hockey career.”

A career, one that is approaching 400 regular season games, that Reaves is grateful for.

“There are some times when I look down and I thank my PCL.”

“I am a die-hard, loyal Raiders fan. I followed (Hall of Fame wide receiver) Jerry Rice. I was a San Francisco 49ers fan, but I became a Raiders fan when he came to Oakland. I’ve stuck with them ever since.”

We just lost (QB, Derek) Carr, but I still hope the guys can hang in there without him. I’m taking Oakland. I’m going to say a low-scoring game and the Raiders defence is going to come up big. I think they’ll find a way. I’m going to call it as an overtime win for Oakland.”

“I’m going with Pitt. I’m calling them in blowout.”

“I’m taking Seattle here. Russell Wilson is a great quarterback. He struggled early when he was dealing with injury, but down the stretch you saw what he’s capable of doing. They have a great defence, too. I’m calling it to be a close one.”

“This is my toss-up game. I like the Giants even though it’s in Green Bay. It’s going to be cold, but I don’t think that will affect them. New York is used to playing in cold weather, so I’m going with the Giants.”

“I’m taking Dallas to win it. My dark horse – I’m going to take Atlanta. They put up so many points. Their offence is so dangerous.”