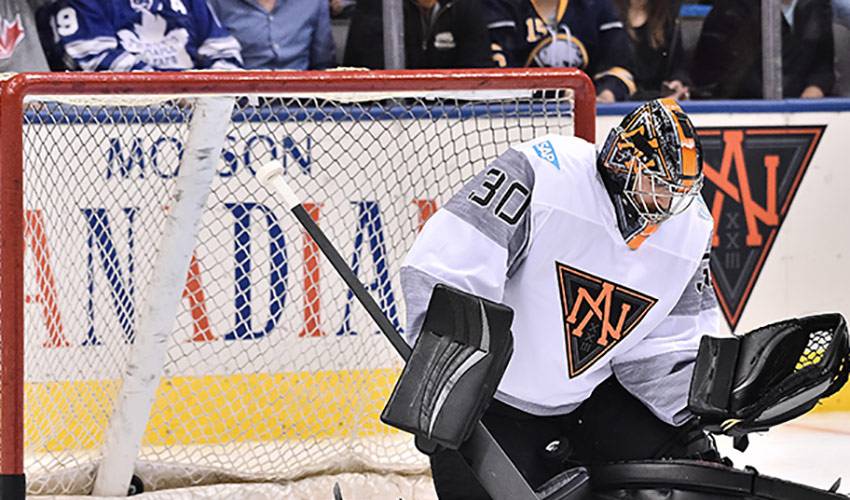 It turns out that a helping hand from Matt Murray is just as impressive as his glove hand.

As one of the NHL’s top goaltenders, coming up big just seems to come naturally for the man who tends the twine for the Pittsburgh Penguins.

So, too, does Murray’s willingness to reach out and make a difference outside of the game.

When the 22-year-old native of Thunder Bay, Ontario discovered there was an overcrowding crisis at the animal shelter in his hometown, he didn’t hesitate to step up and help out.

“My girlfriend and I have always been dog lovers,” said Murray, one day after he and the Pens blanked Vancouver in a 4-0 home win. “She saw on Facebook that the (Thunder Bay & District) humane society had just taken in a number of new rescue dogs and needed as much help as possible.”

The backstopper, who required the fourth-fewest appearances (tied, 44) in NHL history to reach 30 wins, decided to assist by auctioning off the goalie stick he used when he suited up for Team North America at the World Cup of Hockey.

All of the profits from the auction will go to the shelter – one Murray and his girlfriend have long supported – that recently took in 33 dogs from rescues throughout neighbouring regions.

Murray’s act of kindness prompted an outpouring of gratitude – along with plenty of tears – from the people who work at the shelter.

While they might see his generosity as a big deal, Murray certainly doesn’t.

“We just wanted to help out in any way that we could,” he said. “There has been an outpouring of support from a lot of people in the community. It's very touching to see how happy people are to help, as well as the reaction of the humane society.”

One of the accompanying photos on the auction site features Murray dressed in a Team North America sweatshirt, holding the stick, accompanied by his own dog, Beckham.

FRIENDS!! Recently, our local humane society in Thunder Bay, Ont. has been extremely over crowded after rescuing 33 dogs in only one night from neighbouring regions to Thunder Bay. For those who aren’t from Northwestern Ontario, it gets very, very cold during the winter months making it life threatening for these dogs to be outside when they have no food or shelter. Some of these dogs were in emergency distress having been mal-nourished, wounded, and extremely emaciated. Between vet bills, limited space, and caring for these animals until they are healthy enough to be put up for adoption, our Humane Society is in need of some extra love at this time. We are auctioning off a GAME USED hockey stick that Matt played with while on Team North America during the World Cup of Hockey. It is a Vaughn stick that has been painted all black due to advertisement restrictions during the World Cup of Hockey. It has also been appraised by Fanatics Authentic Sports Memorabilia. We will be keeping this up for 10 days. Once closed, Matt will be in contact with you to personally thank you and arrange shipping details for the hockey stick (shipping is covered)! 100% of the money raised will go directly to the Thunder Bay & District Humane Society. It will be used to provide shelter, food, veterinary care and enrichment to animals admitted to the shelter. We will also post a link below if you would like to donate to the humane society. Any contribution is extremely helpful and would go a long way in helping these dogs out! To anyone who has already donated we can’t thank you enough for helping our local shelter care for these animals and get them to their forever homes. http://tbdhs.ca/donate/ Please feel free to repost this ❤️❤️link in bio http://www.ebay.com/itm/-/172528948025? #TeamNorthAmerica #WorldCupofHockey #WCOH2016 #WCOH

“He’s a great dog because he’s always happy and always has unconditional love,” said Murray. “He can't help but make any day brighter.”