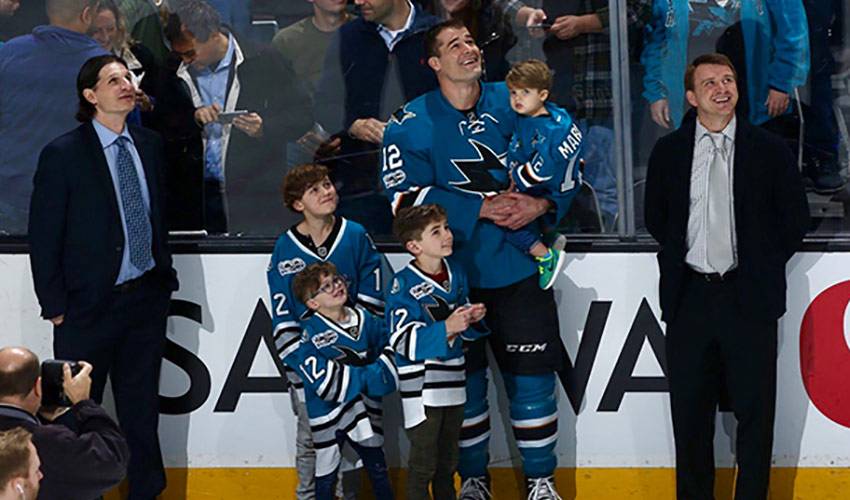 There’s no two points or Stanley Cup on the line, stoppages are a rarity and any minor infractions are overlooked with a smile.

Mini stick hockey at the Marleau house is a nearly daily occurrence. For the father of the four boys – Landon, Brody, Jagger and Caleb – who happens to be a decorated NHL veteran, having a front-row seat for it all is about as good as it gets.

“They love hockey,” said the 37-year-old San Jose forward. “They get those mini sticks out every day and play for a long time. They’re pretty good at it, too. The oldest is 10 and the youngest is two and a bit, but things usually go pretty smoothly. No bad injuries to report yet either. They have a lot of fun with it.”

Marleau sees his big-league career in the same terms.

Earlier this year, the Saskatchewan native was feted at a Sharks home game for his 500th career NHL goal. His wife Christina and their kids were there for the presentation.

The team’s all-time leader in a slew of offensive categories, Marleau has also reached some other impressive milestones along the way, namely, 1,400 games played and 1,000 points. It’s all been achieved in San Jose colours.

“I think the biggest thing I’ve learned over time is not to be too hard on myself,” said the second overall pick in 1997. “Not to beat yourself up over one bad game. You don’t want one bad game to carry over to two or three.”

There has been one constant over an NHL life that began in 1997-98.

“The love for hockey is still there, definitely,” said Marleau, who also has two Olympic gold medals in his trophy case, from 2010 and 2014, both with Team Canada. “To be able to do something you love and have a joy for it every day – I’m truly grateful for that.”

He laughs at how it’s all seemed to go by so quickly.

“You remember starting out, just trying to find your way,” said Marleau. “You have to hang in during those times, work hard to stay in there. It’s not always easy, but you find a way to establish yourself as a full-time player.”

Perhaps, one day, there will be another Marleau skating on NHL ice.

For now, though, Landon, Brody, Jagger and Caleb will sharpen their skills through mini stick hockey.

A little something they picked up from an ideal role model.