Blandisi and Quenneville having devil of a time in Jersey

Joseph Blandisi and John Quenneville met in a classroom, not on the ice. The exercise was to take 10 minutes to interview each other and then relay their partner’s story to the rest of the group. The two forwards liked what they learned and immediately became friends. 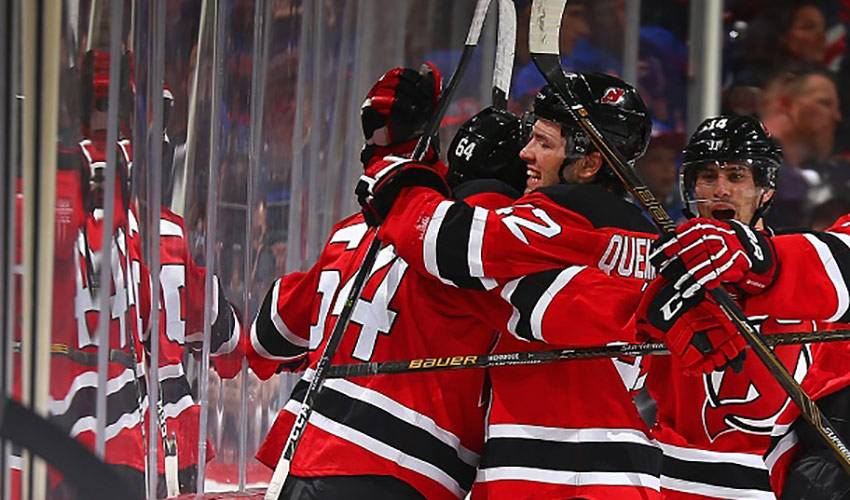 They met in a classroom, not on the ice. The exercise was to take 10 minutes to interview each other and then relay their partner’s story to the rest of the group.

The two forwards liked what they learned and immediately became friends.

Quenneville, two years younger, had the famous last name. He was from Edmonton and yes, he was related to three-time Stanley Cup-winning coach Joel Quenneville. Joel’s father, Norman, and John’s grandfather, Gerard, are brothers.

When the younger Quenneville was a kid, his father Andre once took John and his two brothers to an Oilers-Blackhawks game in Edmonton. They visited Chicago’s dressing room afterward. It was a night to remember.

The Devils passed on the son of a former New Jersey legend, Claude Lemieux, to select Quenneville with the 30th and final first-round selection of the 2014 draft.

With the Brandon Wheat Kings, he advanced to back-to-back WHL finals in his final two years of junior, winning the Ed Chynoweth Cup in his second try. He also played for Canada at the 2016 World junior tournament.

He arrived at Devils training camp last fall, full of confidence from his championship season and excited to catch up with his old buddy, Blandisi.

What Quenneville learned about Blandisi in 2014 was the latter was a story of perseverance. Born in Scarborough, Ont. and raised in nearby Markham, Blandisi bounced around in junior, from the Ottawa 67’s to the Owen Sound Attack to the Barrie Colts.

Blandisi, however, was good enough to be chosen in the sixth round (162nd overall) in 2012 by the Colorado Avalanche. But the Avalanche never signed him.

As a 19-year-old, he suffered a setback when felled by a mystery illness in 2013 that limited his season to 10 games. The young forward felt tired all the time and his balance was off. It turned out he had a foot-to-mouth disease called coxsackievirus.

“It wasn’t fun to go through that,” Blandisi, now 22, said. “Nobody knows how I got it, maybe by sharing a towel on the bench.”

Blandisi’s career could have been derailed that year, but his parents kept his attitude positive and he persevered. Colts head coach, Hockey Hall of Famer Dale Hawerchuk, also would not give up on Blandisi.

He arrived at training camp for his overage season in Barrie recovered, rejuvenated and ready. He was named the captain and went on to score 52 goals and 112 points in 68 games to be named the winner of the Leo Lalonde Memorial Trophy as the league’s overage player of the year.

“I was aware of stories like Barclay Goodrow, who played in the OHL as an overager, and made it to the NHL with the San Jose Sharks,” Blandisi said. “His story and lots of others who did the same thing inspired me.”

When Blandisi and Quenneville arrived at Devils training camp last fall, Quenneville had plenty of questions for his friend. He could not have been more proud of the fact that Blandisi spent half of the previous season in New Jersey and scored five goals and 17 points in 41 games.

“We’re both high-energy guys who like to have fun. We care about each other and we want each other to do well,” said Quenneville, also the nephew through marriage of New York Islanders defenceman Johnny Boychuk.

The two wound up teammates on the AHL Albany Devils for most of this season and shared an apartment. At Christmas, there wasn’t enough time for the 20-year-old Quenneville to travel back and forth to Edmonton to celebrate the holidays so Blandisi took him home to Markham for the break.

Fast-forward to March and the two are still together, now in the NHL with the Devils. They don’t play on the same line, but they do see ice time together on the second power-play unit.

Blandisi wanted nothing more than to set up his friend for his first NHL goal.

That happened on Mar. 21, when Blandisi found Quenneville and he buried a shot for his first NHL goal early in the second period of a home game against the rival New York Rangers.

“I had given him a couple of passes and he hadn’t been able to score,” Blandisi said. “I thought it would be special to assist on his first NHL goal.”

Blandisi appeared more excited than Quenneville, tackling his teammate as they celebrated.

“I had a pretty good feeling going into the game,” Quenneville recalled. “I was excited about my first Devils-Rangers game. I could feel the excitement about the game around the rink and with my teammates.”

That excitement only elevated when Quenneville made a beautiful cross-ice pass to Blandisi in overtime for the latter’s first career NHL overtime winner for a 3-2 victory.

“For us to be on the ice at the same time in overtime against the Rangers and then have John set me up is something we’ll never forget,” Blandisi said. “He made a great pass. It was a special moment.” 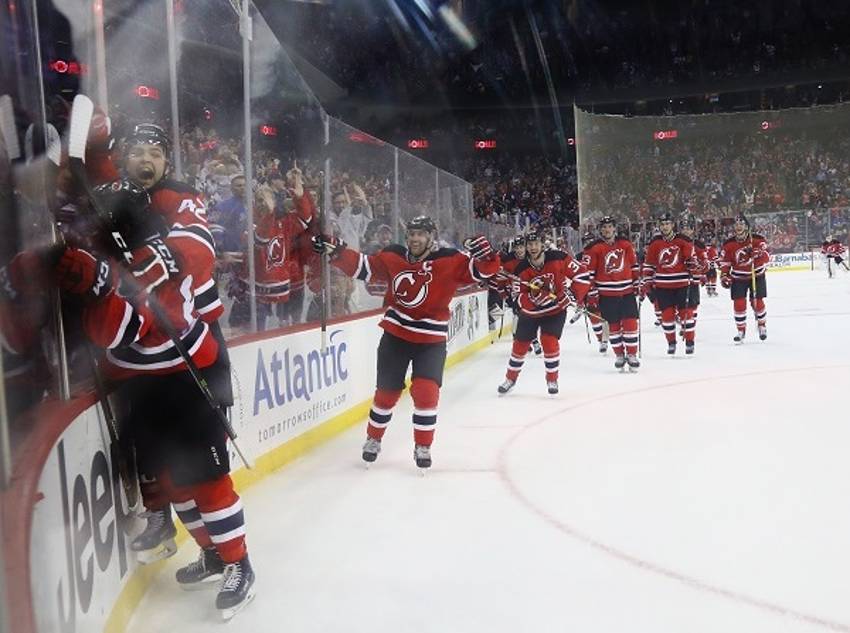