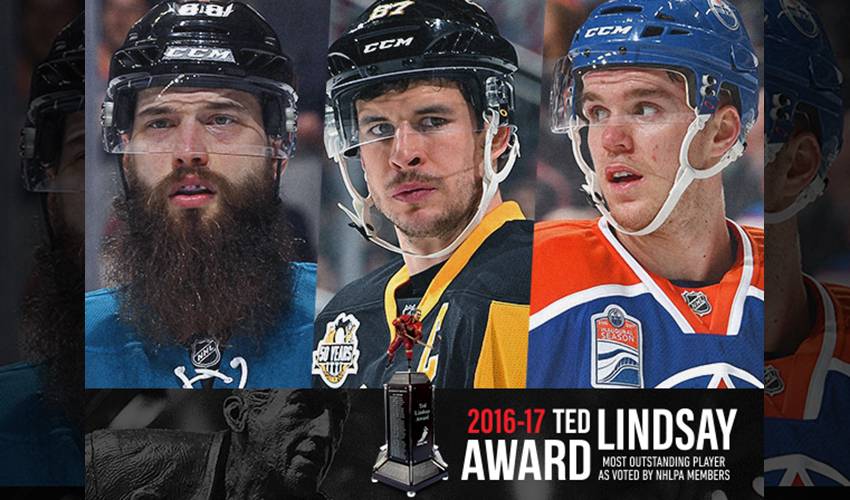 TORONTO (May 2, 2017) – The National Hockey League Players’ Association (NHLPA) announced today the three finalists for the 2016-17 Ted Lindsay Award: defenceman Brent Burns of the San Jose Sharks, centre Sidney Crosby of the Pittsburgh Penguins and centre Connor McDavid of the Edmonton Oilers. The Ted Lindsay Award is presented annually “to the most outstanding player in the NHL,” as voted by fellow members of the NHLPA.

Crosby is vying for his fourth Award, while Burns and McDavid are each seeking to become the third consecutive first-time recipients of the Ted Lindsay Award (Carey Price, 2014-15; Patrick Kane, 2015-16).

The 2016-17 Ted Lindsay Award recipient will be announced Wednesday, June 21, during the 2017 NHL Awards at T-Mobile Arena in Las Vegas. The three finalists received the most votes from their fellow players (listed below in alphabetical order):

Burns, of Barrie, Ontario, Canada, played in all 82 regular season games for the San Jose Sharks in 2016-17, and he helped his club qualify for the playoffs in the Western Conference. Burns led all NHL defencemen in goals (29), points (76), points per game (0.93), game-winning goals (6), and his total shots on goal (320) led the league, while he finished ninth in league scoring. Burns also set single-season franchise records for goals and points by a defenceman. He is the first defenceman to be voted a finalist in 17 years (since Chris Pronger, 1999-00); if selected, he would become only the second defenceman (following Bobby Orr, 1974-75) to receive the Award. Burns is a first-time Ted Lindsay Award finalist.

Crosby, of Cole Harbour, Nova Scotia, Canada, played in 75 regular season games for the Pittsburgh Penguins in 2016-17. Following a Stanley Cup-winning season, he captained the Penguins to the second-best record in the Eastern Conference. Crosby won his second Maurice “Rocket” Richard Trophy for scoring the most goals in the NHL (44). He tied for second in both points (89) and even-strength goals (30), while he placed second in points per game (1.19) and fifth in power-play goals (14). Crosby is one of six three-time recipients (Guy Lafleur, Wayne Gretzky, Mario Lemieux, Jaromir Jagr, Alexander Ovechkin) — a group he joined after he was voted the Ted Lindsay Award recipient in back-to-back seasons (2012-13, 2013-14). He also received the Award in his second season (2006-07).

McDavid, of Richmond Hill, Ontario, Canada, played in all 82 regular season games for the Edmonton Oilers in 2016-17. In his second NHL season, he captained the Oilers to the fourth-most points in the Western Conference and the club’s first playoff berth since 2006. McDavid won his first Art Ross Trophy for scoring the most points (100), while leading the NHL in assists (70), points per game (1.22), even-strength assists (45) and even-strength points (71). He also finished fourth in average ice-time per game among forwards (21:07) and third among forwards in power-play assists (24). He is looking to become the third Oilers player (Gretzky, Mark Messier) to receive the Award. McDavid is a first-time finalist for the Ted Lindsay Award.

The Ted Lindsay Award is unique as the only award voted on by the players themselves, carrying on the tradition established by the Lester B. Pearson Award in 1970-71. The Award honours its namesake, Ted Lindsay, an All-Star forward known for his skill, tenacity, leadership, and his role in establishing the original Players’ Association.