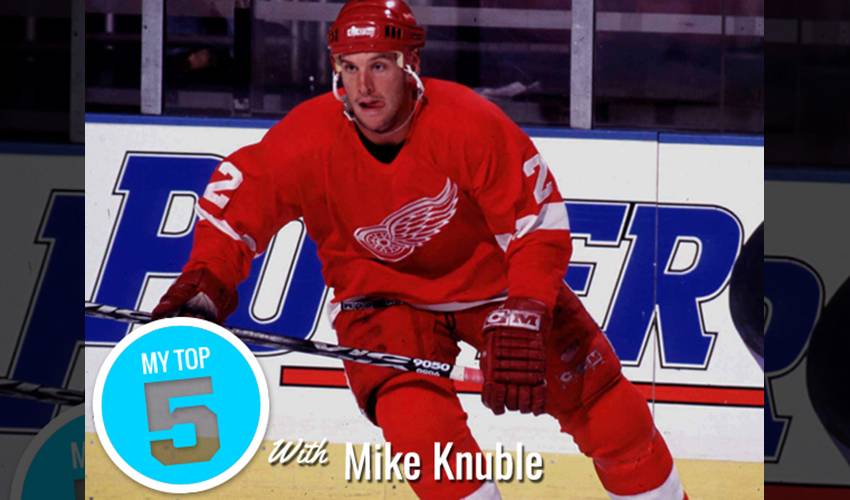 Mike Knuble hoisted hockey’s most cherished team trophy in 1998 with the Detroit Red Wings. The right-winger played 1,068 career NHL regular season games and was a lifetime +76.

In this edition of My Top 5, the former fourth-round pick of the Detroit Red Wings offers up the most effective ways a forward can make a post-season impact other than scoring.

Mike Knuble's Top 5 tips to be effective - other than scoring

“The obvious thing would be to be physical. Any time you can wear a guy down or slow them down, it can be a really effective way to gain an advantage, especially if you look at who the other team’s high-end guys are. If you can be hard on them, slow them down, make it hard for them and tire them out – it can be a very good way to help your team. It’s what they call being hard to play against.”

“Sacrifice your body. Block shots. Any time a puck gets back to the point, if you can get your body in front of the shot – paying the price in that respect – it’s a very important way to help your team.”

“When you work with your linemates to do all the little things out there – using the body, blocking shots, finishing checks – you can find ways to grind down the other team. You think back to the ‘Grind Line’ in Detroit’s heyday – Kris Draper, Kirk Maltby, Darren McCarty and Joey Kocur – with those four guys rotating through three spots. They were just really effective. They would just check the hell out of the other team’s top line and played a big role in Detroit winning.”

“You want to be a pest. You want to be hard on the other team when they get the puck in their end. Again, it’s about throwing effective checks, trying to get them to turn over the puck and making it tough for them to get anything going the other way. You have to be a good skater, know their tendencies and make sure you keep up with the opposition.”

“Being good on the faceoff circle, that’s such a huge thing. You want to be a dependable guy. You live for those crucial moments – at the end of a period, at the end of a penalty, in a Game 7 – when you need to win a draw. It’s a pretty big deal. Guys that can do it find themselves on the ice a lot. If you can get that reputation for being good at faceoffs, teams will sign players because of that. It’s obviously a big role without having to put the puck in the net.”

A Milestone of Capital Proportion

A New Approach to the Ultimate Goal