Colton Sisson Rises to the Occasion

With a trip to the Stanley Cup Final on the line, Colton Sissons, playing on Nashville’s top unit alongside Filip Forsberg and Pontus Aberg came through in a big, big way. 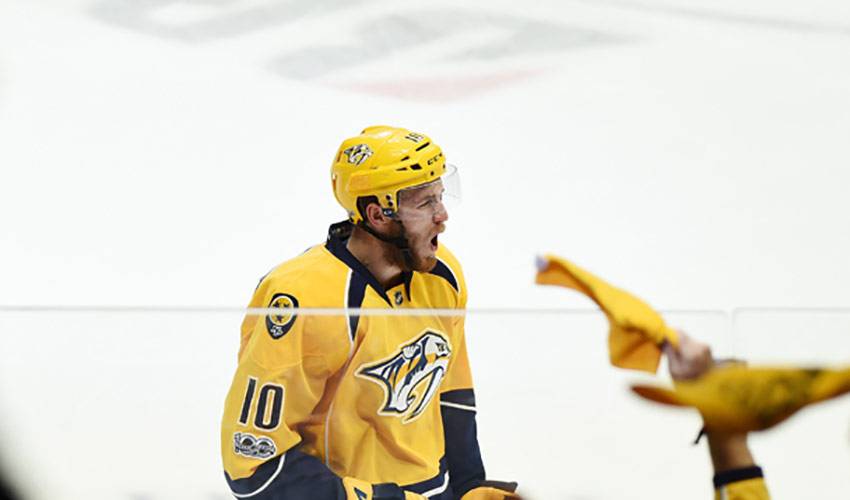 With a trip to the Stanley Cup Final on the line, Colton Sissons, playing on Nashville’s top unit alongside Filip Forsberg and Pontus Aberg, came through in a big, big way.

As far as promotions go, the kid from North Vancouver came through with flying colours.

Sissons, 23, netted a hat trick (on three shots), including the game-winning tally, was a plus-5, earned first star recognition and most notably, helped send Nashville to its first-ever appearance in the Stanley Cup Final.

Not a bad night’s work.

“It feels good, man,” said Sissons, in the aftermath of the 6-3 home win over Anaheim. “I'm not going to lie. Obviously I don't think I even dreamt this moment, scoring a hat trick in a Western Conference-clinching game. I can't speak enough for just our whole group. We've been through some challenges together and we stuck together no matter what, just believed and here we are.”

After sweeping Chicago in four games in round one, the Predators took out St. Louis in six, sending Anaheim to the sidelines in the same number of games.

Nashville will now await the winner of the Eastern Conference Final, either Ottawa or Pittsburgh, to see who they will face for all the spoils.

The Predators will no doubt look to the player who has gone from healthy scratch to first-line duty in their quest for Cup glory.

“It was a wild ride so far this year, a lot of challenges for me personally, obviously being out of the lineup,” admitted Sissons. “I just wanted to be a regular guy playing every single night to now arguably one or two centre for us with Joey and Fish out. It's been a wild ride, but it feels good and I'm just enjoying it.”

So, too, is head coach Peter Laviolette.

“Colton's answered all the challenges that we've asked of him lately,” said the Nashville bench boss. “And tonight, I think, was just -- his game tonight went to another level. The goals are one thing, but the way he competed, the way he defended, the penalties he killed, the faceoff battles he got into. The hits that he took, the hits that he gave, he was -- that's the best I've seen him.”

He doesn’t need to be reminded of what awaits him and his teammates.

“We worked so hard all year for this,” said the 2012 second-round pick of the Predators. “So it feels good to get this far but still some work to do.”

Knowing Colton Sissons is on the job certainly gives Nashville reason to be optimistic.

“He is a hockey player,” said Laviolette. “He's a smart kid. He comes to the rink. He works hard. He's a total pro.”