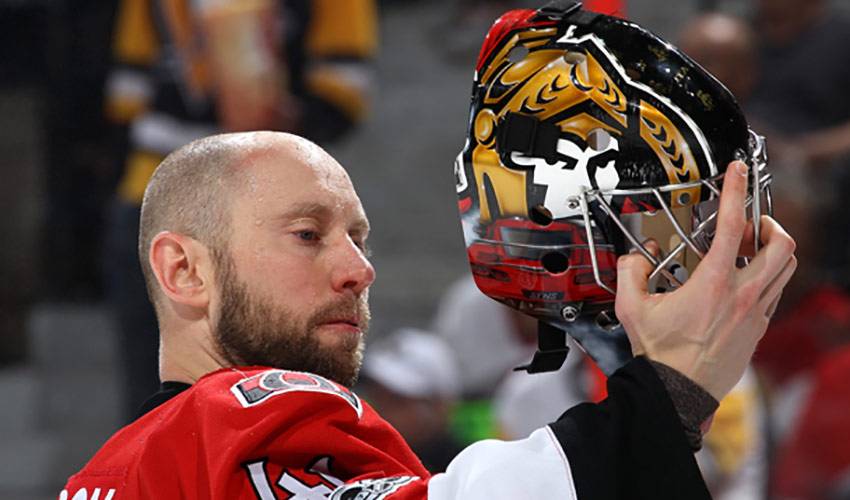 Would Craig Anderson be able to bounce back? It was one of the biggest questions heading into Game 6 of the Eastern Conference Final - and No. 41 had an emphatic response.

After letting four pucks get past him on 14 shots and getting pulled in Ottawa’s 7-0 loss to Pittsburgh in Game 5, the 36-year-old Anderson was a hot topic of conversation leading up to Tuesday night as the Senators sought to stave off elimination on home ice.

He made headlines again, but this time, the end result left him beaming: 45 saves, a 2-1 win, and a shot at a date in the Stanley Cup Final.

“The moment I got yanked in that game, it's gone,” said Anderson. “You can't change what happened in the past. So from that moment on, you have to look forward and get ready for the next one. So as soon as that happens and you leave the rink, you put it behind you.”

In Game 6, Anderson faced 11 Penguins shots in the first period, 23 in the second and 12 in the third. The only puck that got past him was an Evgeni Malkin tally in the middle frame.

And while he didn’t earn first star recognition – Mike Hoffman, who scored the game-winning tally got that honour – Anderson played a lead role in helping the Senators force a Game 7 in Pittsburgh.

A major reason behind the poise and resilience Anderson displayed in the aftermath of a tough outing can be traced back to a life-changing meeting over 15 years ago.

“I think my biggest strides as – in pro hockey, as far as mentally, was probably after my first year pro,” he recalled. “It was one of those things where you find – I found a sports psychologist that I liked and worked with him when I was a young player and used those tools. You know, read a couple books here and there along the way. It's a tough thing to do, but having nights like tonight just emphasizes things you've read or things you've been taught.”

Ottawa head coach Guy Boucher had no doubt his No. 1 netminder would be able to turn the page after Game 6.

“I think what he's done all year, in terms of focus and rebounding and coming up with big saves, I think, is at the forefront of what these guys have been doing,” he said. “They believe in each other, and they know that there are a lot of big time guys in that room. It's not always the same guy. Now it's a roller coaster all series, not just this one, but all the previous ones. And he's been terrific at reloading mentally, physically, and emotionally. I think it's the measure of our team.”

A team that now finds itself just one victory away from taking on the Nashville Predators with hockey’s ultimate team prize on the line.

The Senators know what they can expect from Anderson on Thursday night.

Bobby Ryan, who tied the game on the power play in the second period, opted for just one word to describe the backstopper’s Game 6 performance.