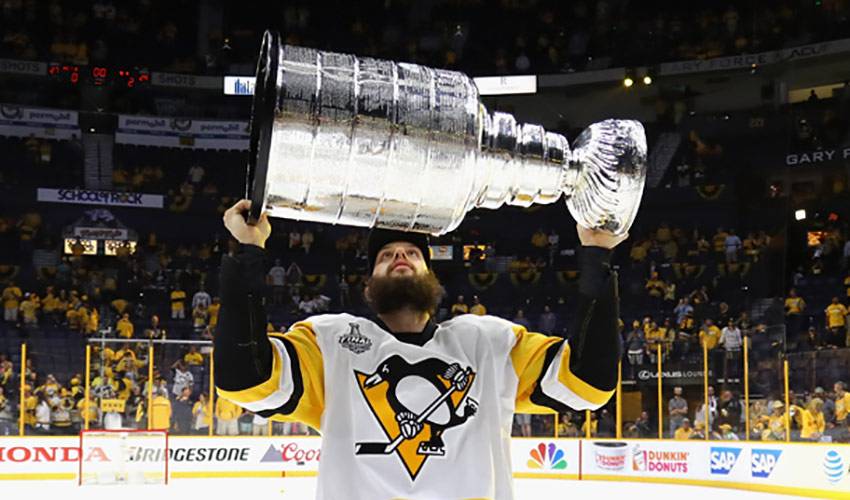 When the shot off the stick of Nashville’s P.K. Subban struck Bonino’s leg in Game 2 of the Stanley Cup Final, his face was immediately etched in pain. Somehow, Pittsburgh’s veteran forward managed to will himself to his feet and attempted to get in front of two other blasts from the blue line.

After a Predators penalty stopped play, Bonino crumpled to the ice, needing the help of the team trainer and teammates to escort him off the ice and into the dressing room.

Penguins' Nick Bonino could barely stand up after blocking a massive blast from P.K. Subban.#StanleyCup

The 29-year-old was seemingly down and out. Or so it appeared.

But when the second period started, there was Bonino, back on the bench and on the ice.

The box score showed Bonino had 16:06 of ice time, took 25 shifts, recorded two shots on goal, went 11-7 in face-offs and registered two takeaways, along with the one blocked shot.

It didn’t mention the broken tibia he suffered.

“When the break happened and I went into the back I knew it wasn't just a bruise,” Bonino told NHLPA.com. “After the x-ray confirmed it, we decided to shoot it up, understanding if it displaced anymore we would need surgery. I think in that position most guys would make the same call. We all want to contribute, especially in the Cup Final. After the game and throughout the rest of the finals, we tried to work with it but I just had no power because it's the weight-bearing bone.”

Pittsburgh head coach Mike Sullivan was full of praise for Bonino in his press conference after Game 2.

“I think Nick's willingness to sacrifice his body to help us on the penalty kill is inspiring for the team,” said Sullivan. “Those are the types of plays that help teams win, especially at this time of year. That was a big part of the game for us tonight.”

Jake Guentzel, the rookie Penguins forward who scored a playoff-leading 13 goals, was equally impressed by his teammate’s effort.

“He's a special player,” said Guentzel. “He lays his body on the line for the team. Whenever you see that, it definitely gets you going.”

Bonino, who tallied seven points in 21 post-season contests, was cast to a spectator role for the rest of the championship round, one that ended on June 11 when the Penguins defeated the Predators in six games.

Despite his absence in the lineup – he wouldn’t have been able to play if the series went to seven games – the Connecticut native was able to celebrate with his teammates and family in the aftermath of the championship-clinching 2-0 triumph.

“The best part of the Cup celebration is when our families come onto the ice,” said Bonino, who was in full uniform for the festivities. “We all wait expectantly at the Zamboni doors, and when we see our family it's such a great feeling. They sacrifice so much time and energy throughout the year, whether we're on the road or napping at home, and it's just as much their Cup as it is ours.”

“Kissing (his wife) Lauren and (their daughter) Maisie and carrying my daughter around the ice is one of the best feelings you can have.”

While it didn’t play out as he expected, Bonino, admittedly, won’t forget his second championship win for a long time.

“Sitting out and watching is nerve wracking, but holding the Cup, that makes it all worth it.”