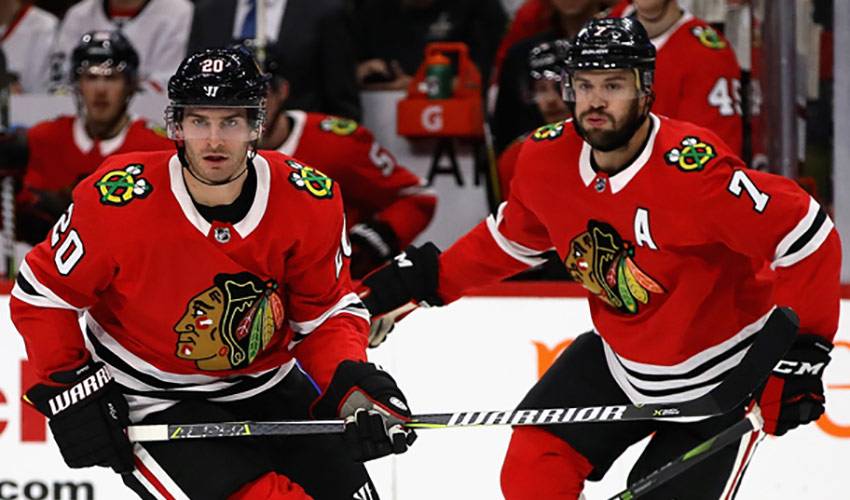 For the first 208 games of his NHL career, Saad had the luxury of skating alongside one of the game’s most intense competitors, a player that could deliver a huge hit and a huge goal all in one night’s work.

Before signing up for his second tenure with the Blackhawks, the left-winger spent 160 games as a member of the Columbus Blue Jackets seeing the veteran blueliner through a much different lens.

No matter what the uniform, Saad has plenty of praise for Seabrook.

“I think his size and strength make him a very tough opponent,” offered Saad. “He also has a great shot.”

Since breaking into the NHL in 2005-06, Seabrook, the 14th overall pick of the Blackhawks in 2003, has been a reliable presence as a member of Chicago’s defensive corps.

A three-time Stanley Cup champion, the British Columbia native has 406 career points, including 88 goals, in 923 regular season games. His plus-minus rating stands at plus-119 entering the 2017-18 campaign.

If all goes to plan, Seabrook will hit the 1,000-game mark late in the season.

Seabrook also happens to have a knack for being great in playoff overtime games.

He netted a pair of extra-frame tallies in the 2013 Stanley Cup Playoffs – one against the Detroit Red Wings, the other coming against the Boston Bruins – along with another (in the third overtime period) in Game 4 of Chicago’s Western Conference quarterfinal series versus Nashville.

“I love overtime,” said Seabrook, who was named an alternate captain in September of 2015. “I think it's such a great part of the game, especially in the playoffs. I grew up loving it, and just to be able to get opportunities and play in games like that, they're a lot of fun, and everything is right on the line. I think I definitely try and raise my game in overtime and try and be better.”

Beyond the overtime heroics, booming shots and bone-crunching body checks, Seabrook, who won a gold medal with Team Canada at the 2010 Winter Olympics, is also a respected teammate.

“He leads by example and he is always there for you off the ice to help out,” praised Saad. “He’s very easy to get along with.”

Just not so easy to play against.