Cancer survivor Oskar Lindblom of the Philadelphia Flyers was named Monday as the winner of the Bill Masterton Memorial Trophy. 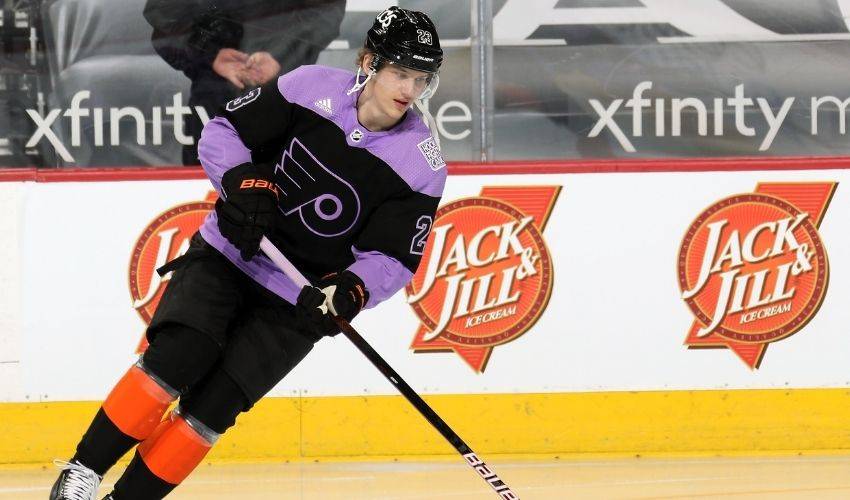 Cancer survivor Oskar Lindblom of the Philadelphia Flyers was named Monday as the winner of the Bill Masterton Memorial Trophy for perseverance, sportsmanship and dedication to hockey.

Lindblom returned to play in the NHL after undergoing treatment for a rare form of bone cancer. Lindblom was diagnosed with Ewing’s sarcoma in December 2019 and played two games for Philadelphia during the bubble playoffs in September 2020.

The 24-year-old Swede regained his regular spot in the Flyers' lineup this season and played 50 of 56 games. He recorded 14 points averaging just over 13 minutes of ice time.

“Last season was a battle for me, but just to be able to get back on the ice was so, so good,” Lindblom said in a video accepting the award from 2020 winner Bobby Ryan. “It’s an awesome feeling to be back on the ice again.”

Lindblom completed treatment in July and was again declared cancer-free following another scan in March. He said at the time he would feel good one day and like he hadn't played hockey for a while the next.

“Just to get back from losing all the muscles, then you start playing again and to feel like you’re not really there,” Lindblom said Tuesday. “It's tough time to just get around, and then it just starts hitting you mentally, as well, and you feel tired.”

Ryan said he felt like Lindblom should have won this last year when he received the most Masterton votes after publicly sharing his battle with alcohol issues. Lindblom was also a finalist then, before getting back on the ice for game action.

Lindblom thanked his family, girlfriend and the doctors and nurses who helped him along the way.

San Jose’s Patrick Marleau and Minnesota’s Matt Dumba were the other finalists for the award voted on by members of the Professional Hockey Writers Association. Marleau broke Gordie Howe's career games played record at age 41, while Dumba continued his efforts to fight for more diversity in hockey.

“I feel very honored and proud to win this award and to compete with these players like Matt Dumba and Patrick Marleau that have been great players and great people on and off the ice," Lindblom said. "That’s very special for me.”