May 19, 2019
By:
Canadian Press
Playoff Performer of the Night
Jaden SchwartzSt. Louis Blues

Jaden Schwartz added the first of his three goals during a dominant second period that carried St. Louis to the brink of its first trip to the Stanley Cup Final in a 5-0 victory over the San Jose Sharks Sunday. 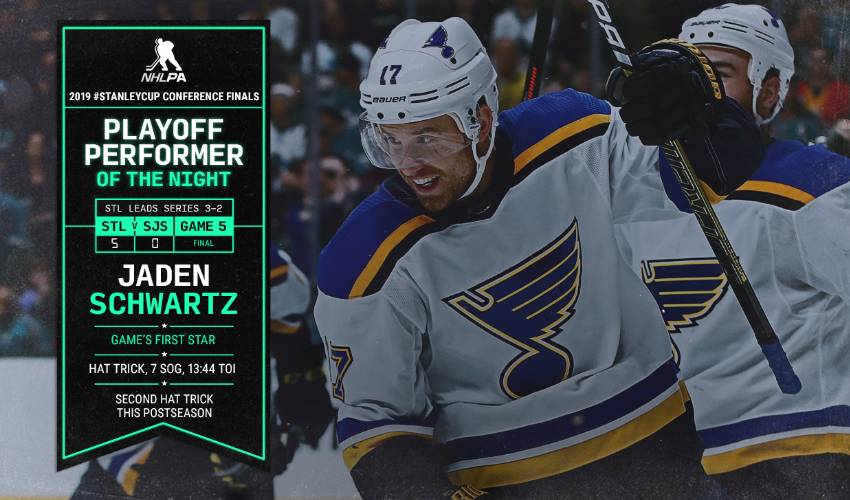 SAN JOSE, Calif. — Vladimir Tarasenko scored on a penalty shot and Jaden Schwartz added the first of his three goals during a dominant second period that carried St. Louis to the brink of its first trip to the Stanley Cup Final in nearly a half-century, sending the Blues to a 5-0 victory over the San Jose Sharks on Sunday in Game 5 of the Western Conference final.

St. Louis used a relentless forecheck to take control of the game and series in the second period, getting the two goals and outshooting the beleaguered Sharks 20-6 during the frame. It also got 21 saves from Jordan Binnington in his first playoff shutout and a first-period goal from Oskar Sundqvist to overwhelm the Sharks.

Schwartz added two goals in the third for his second hat trick this , becoming the first player with two in one playoff run since Johan Franzen for Detroit in 2008.

The victory gave the Blues a 3-2 series lead, the closest they've been to making the final since getting there in their first three seasons as the winner of the all-expansion Western Conference. St. Louis can earn its first trip back to the final since 1970 with a win at home in Game 6 on Tuesday night.

Martin Jones made 35 saves for the Sharks but got little help from his teammates, who have been held to one goal in losing the past two games. San Jose now faces elimination for the third straight series, having overcome a 3-1 series deficit to Vegas in the first round and winning a Game 7 at home in the second round against Colorado.

San Jose got off to a spirited start in the rare afternoon contest that led to a more subdued crowd than usual at the Shark Tank. Evander Kane hit the post just 12 seconds into the game and the Sharks had the better of the play in the opening 20 minutes despite falling behind 1-0 when Sundqvist converted a turnover from a hobbled Erik Karlsson into a goal less than six minutes into the contest.

Karlsson has been hampered by a groin injury that sidelined him for 27 of the final 33 games in the regular season and has been extremely limited since the third period of Game 4. He tried to make a quick outlet under pressure but his pass went through teammate Brenden Dillon's skates, off the boards and right to Sundqvist, who beat Jones to give the Blues their fourth goal of the series from the fourth line.

The Blues then took over in the second period, putting 11 shots on goal in less than five minutes. They added to the lead when Tarasenko's shot was partially blocked. Jones then swept it away but it went right to Schwartz, who knocked it into the open net to make it 2-0.

The Blues didn't let up after that and kept the pressure, leading to a breakaway by Tarasenko. He was pulled down by Brent Burns for a penalty shot and converted it with a shot high to Jones' glove side.

NOTES: Schwartz has 12 goals in the playoffs after scoring just 11 in 69 regular-season games. ... Karlsson and F Tomas Hertl didn't play in the third period. ... Sharks captain Joe Pavelski also left in the third after taking a hard hit from Blues captain Alex Pietrangelo. ... Tarasenko's goal was the first converted penalty shot in the playoffs ever for the Blues. They missed their only other chance by Jimmy Roberts in 1968. ... F Micheal Haley returned to the Sharks lineup on the fourth line in place of Marcus Sorensen.