May 5, 2019
By:
Canadian Press
Playoff Performer of the Night
Samuel BlaisSt. Louis Blues

Jaden Schwartz and Sammy Blais scored in a 33-second span and the Blues beat the Stars 4-1 on Sunday to force Game 7 in the second-round Western Conference semifinal series. 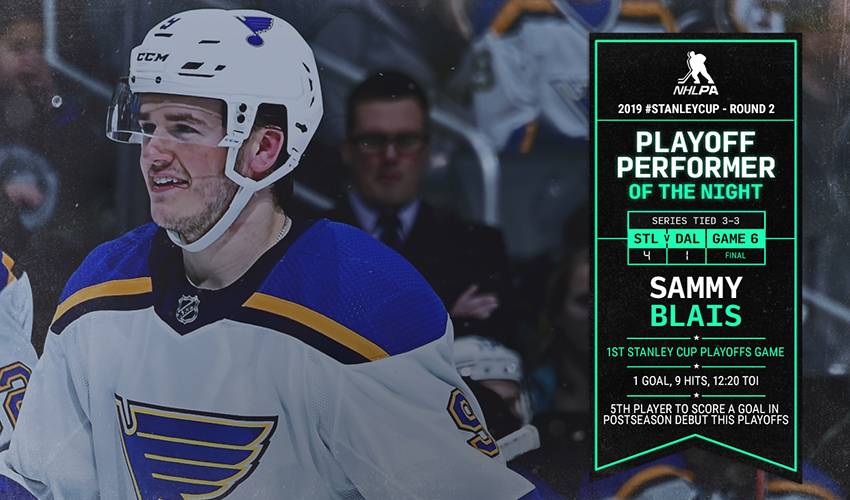 DALLAS — Jaden Schwartz and Sammy Blais scored in a 33-second span of the third period for St. Louis that knocked Dallas goaltender Ben Bishop out of the game, and the Blues beat the Stars 4-1 on Sunday to force Game 7 in the second-round Western Conference semifinal series.

Schwartz scored to make it 3-1 with 13:23 left when he redirected Alexander Steen's shot. Steen had gathered the puck outside the right circle after Colton Parayko's shot deflected off Bishop's left shoulder and knocked the stunned goalie to the ice.

Bishop was tended to by a trainer and initially stayed in the game, but a switch was made soon after when Blais, playing his first game, got a slap shot past him.

Alex Pietrangelo, their captain, scored only 63 second into the game and David Perron also had a goal for the Blues, who will be on home ice for the deciding game Tuesday night.

The Central Division rivals also went to a Game 7 when they met in the second round three years ago. That series finale was played in Dallas, where the Blues scored three times in the first period and went on to a 6-1 win.

Bishop, who came into the game with a .936 save percentage in the playoffs, stopped 16 of 20 shots. Anton Khodobin had five saves in the final 12 minutes in his first action this .

The two quick goals by St. Louis came right after Dallas couldn't score with Binnington sprawled on the ice.

Perron put the Blues ahead to stay at 2-1 when he reached around John Klingberg to score in what was otherwise a somewhat pedestrian second period.

Oskar Sundqvist skated deep into the right circle and passed back across the front of net. Perron, with Klingberg between him and Bishop, reached his stick around the defender to poke the puck in for his third goal of the playoffs.

The Stars' 23 shots matched their fewest in the playoffs. Their goal came with 8:25 left in the first period when Mats Zuccarello made a pass from the top of the right circle and Seguin's shot got under Binnington and trickled past the line to make it 1-1.

NOTES: St. Louis is 5-1 on the road in the playoffs, their most wins away from home in a single . ... The Blues are 29-41 when facing elimination in best-of-seven series, 11-26 on the road. Dallas dropped to 25-20 in potential clinchers, 13-7 at home. ... It was 11 years ago Sunday that Dallas finished a four-overtime win in Game 6 over San Jose (the game started on May 4, but ended after midnight on the May 5) to wrap up that second-round series. That had been the last time the Stars clinched a playoff series at home before their Game 6 win over Nashville in the first round this year.

The deciding Game 7 is Tuesday night in St. Louis.