The NHL is coming to Seattle. 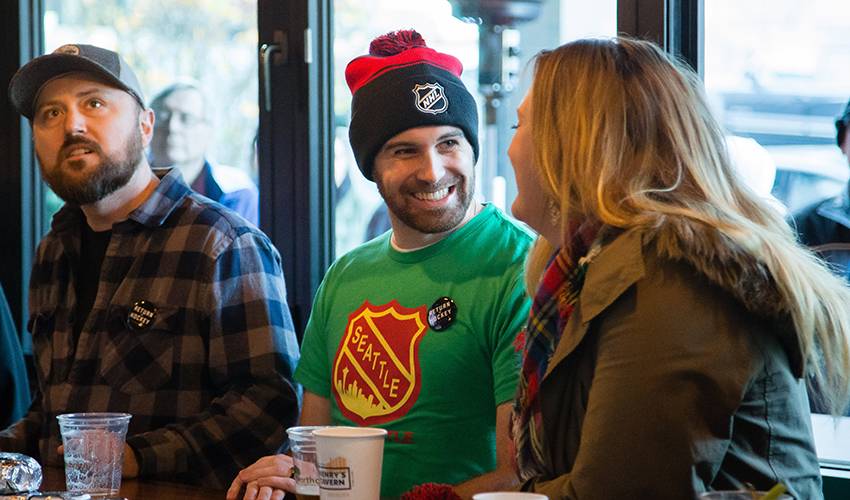 The city will just have to wait a little longer than originally planned for its new team to hit the ice.

The NHL's 32nd team, which was unanimously approved in a vote by the board of governors, will begin play in 2021-22 at a renovated and renamed KeyArena.

Seattle's ownership group led by billionaire David Bonderman and a number of minority partners, including Hollywood producer Jerry Bruckheimer, is paying US$650 million to join the exclusive club.

"The league's expansion decision was only made possible because Seattle will possess the three pillars essential to the success of any franchise: terrific, committed ownership, a thriving market and a state-of-the-art venue," Bettman said.

It was initially hoped the team would begin play in 2020, but concerns from the NHL that the franchise's home — which will be known as Seattle Center Arena — won't be ready in time pushed the start date back 12 months.

"I have business cards I'm going to have to toss out that say Seattle 2020," joked team president and CEO Tod Leiweke, who said he expects the venue open in March or April 2021. "Waiting a little longer seemed to make a lot of sense and we ultimately agreed with the league."

Seattle's expansion fee is $150 million more than what the Vegas Golden Knights paid when they joined the NHL in 2016.

"I never talk about personal finances," Bonderman said of the price tag. "But this is a few bits of change which aren't around anymore."

While the U.S. Pacific Northwest has little recent hockey history at the professional level, the Seattle Metropolitans were the first American team to win the Stanley Cup, defeating the Montreal Canadiens in 1917.

The Metropolitans, who were formed by Hall of Fame brother Frank and Lester Patrick, played in the Pacific Coast Hockey Association before folding in 1924. There was also a failed attempt at NHL expansion to Seattle in the mid-1970s.

No announcement was made regarding what the new team will be called Tuesday, but Bettman seemed to pour water on the Metropolitans being in the running because the league already has a division with that name.

But whatever name the club goes by, Leiweke is convinced the venture will succeed.

"I remember sharing with Gary Bettman years ago that I thought Seattle could be an incredible market for the NHL," Leiweke said. "It's now up to us to deliver the championship team these fans deserve."

Seattle will play in the Pacific Division, meaning the Arizona Coyotes will move to the Central. The league's most recent addition gives the NHL an even 16 franchises in the Eastern and Western conferences and will provide the Vancouver Canucks a natural geographic rival.

"I don't want to stoke the flames here because those guys are my friends, but bring it on, we can't wait," Leiweke said. "That might be the one night I walk into the locker-room and say to the boys, 'Give it a little more tonight.'"

Viewed as a slam dunk ahead of the vote at this posh resort on Georgia's coast, expansion to Seattle — the largest U.S. market without an NHL or NBA team prior to today's announcement — required 75 per cent approval, in this case a thumbs up from 24 of 31 owners, to pass.

"I never felt it was preordained," Leiweke cautioned. "This has been a real journey that's had challenges.

"It's not been for the faint of heart."

The expansion fee will be divided between 30 NHL teams, meaning a cut of more that $21 million per club. Vegas does not get any of the money and is exempt from the expansion draft, which will take place in June 2021.

"I love Seattle," Bonderman said. "I went to school (there) ... I worked on the Space Needle in 1962. So what goes around comes around.

"If it was someplace else, I wouldn't have done it."

The NHL board's nine-member executive committee recommended proceeding with the expansion application in October after a presentation that included Bonderman, Bruckheimer and Leiweke.

"We were very optimistic going into the process that this would work out the way it did," deputy commissioner Bill Daly said. "As we went through application process and got more and more information and did our due diligence process on the Seattle market, it certainly became even more attractive."

Bruckheimer said the arena was always the main issue for the league when it came to Seattle's start date, not the potential for another NHL work stoppage — a third since 2004-05 — that could come in the fall of 2020.

"They've always felt that we should have a little more time to build the arena right," Bruckheimer said. "We wanted to bring it to 2020-21 because we want to get going right away.

"But it's not fair to the fans or to the players to not have a 100-per-cent finished arena when we start."

The only winter professional sports franchise in the city, Seattle's hockey team joins a crowded landscape that includes the NFL's Seahawks, MLB's Mariners and the Sounders of Major League Soccer.

KeyArena, which was home to the NBA's SuperSonics before they moved to Oklahoma City in 2008, is primed to undergo a massive $800-million renovation, up from the previously stated $700 million.

Oak View Group, which will redevelop and manage the facility, is run by Leiweke's brother Tim, who used to head Maple Leaf Sports and Entertainment in Toronto.

A ground-breaking ceremony at KeyArena is scheduled for Wednesday and there are also plans for a $70-million practice facility in the Seattle's north end.

After the NHL said it would consider the potential ownership group's expansion application at this time last year, a season-ticket drive to gauge interest resulted in a jaw-dropping 32,000 deposits in one day, including 10,000 purchased in the first 12 minutes.

"Today is a great day for the fans and we owe them so much. That's why today happened."