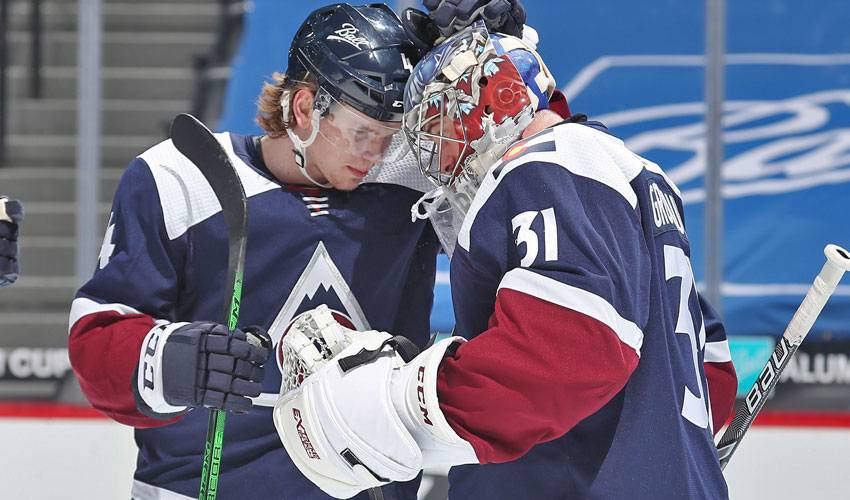 Philipp Grubauer continues to enjoy a career-best season with the Colorado Avalanche. This past week he co-led the league in wins while recording his fifth shutout.

Grubauer went 3-0-0 while sporting an impressive 0.38 GAA and .985 save percentage. He also matched the longest winning streak of his career improving to 6-0-0 over his last six games.

With five shutouts this season, the 29-year-old looks to make a move up the Avalanche record books as only two other netminders in team history have recorded more in a single regular season.

The Avalanche are coming off an impressive 7-1-1 stretch over a nine-game homestand with Grubauer appearing in every game. He credited his teammates for playing a big part in his success this season.

"Without my teammates, it wouldn't be possible," Grubauer said. "Everybody's working hard, everybody's doing the right things in the [defensive] zone, blocking shots. Incredible work by everybody, sacrificing themselves.”

Grubauer made 15 saves after replacing backup Hunter Miska as the Avalanche earned an 8-4 victory over the Anaheim Ducks at Ball Arena Tuesday night.

With Colorado trailing 4-2 after the first period, Grubauer came into the game and stopped all seven shots directed at him in the period, allowing his team a chance to tie the game.

The Avalanche scored six unanswered goals and Grubauer was perfect the rest of the game to improve to 16-7-0 with a 1.85 GAA and a .925 save percentage in 23 games this season.

Leading 2-1 in the second period, Edmonton took advantage of the Senators’ line change as teammate Kyle Turris set up Draisaitl with a pass that he quickly wired past Joey Daccord for his 11th goal of the season.

Grubauer extended his winning streak to five games in the Avalanche’s 5-1 victory over the Minnesota Wild at Ball Arena Thursday night.

Going up against a Wild team that was on a five-game winning streak, the Avs starter remained sharp allowing only a single goal on 20 shots. Over his prior five games, Grubauer had allowed a combined three goals.

Grubauer had a lot of support against Minnesota as Colorado recorded 55 shots on goal –  the second-most in franchise history.

Grubauer turned aside 31 shots to earn his fifth shutout of the season in the Avalanche’s 6-0 victory over the Wild Saturday night at Ball Arena.

With the win, the 29-year-old tied his career-high with his 18th win of the season and the sixth straight victory set a new personal best.

With the two wins over Minnesota, Colorado gained some much-needed breathing room for second place in the West Division as they continue their push to catch the Vegas Golden Knights who they sit three points behind.

“Moving forward, as we get closer to the playoffs, that's the way we need to play,” Grubauer said about his team’s play. “It was two huge games against them. That's a team we might meet in the playoffs, so we wanted to make a statement."

Grubauer will look to continue his winning streak as the Avalanche travel to take on the Arizona Coyotes March 22 and 23 then return home to play the Golden Knights March 25 and 27.