March 4, 2020
By:
Chris Lomon
After the Buzzer
Brenden DillonWashington Capitals 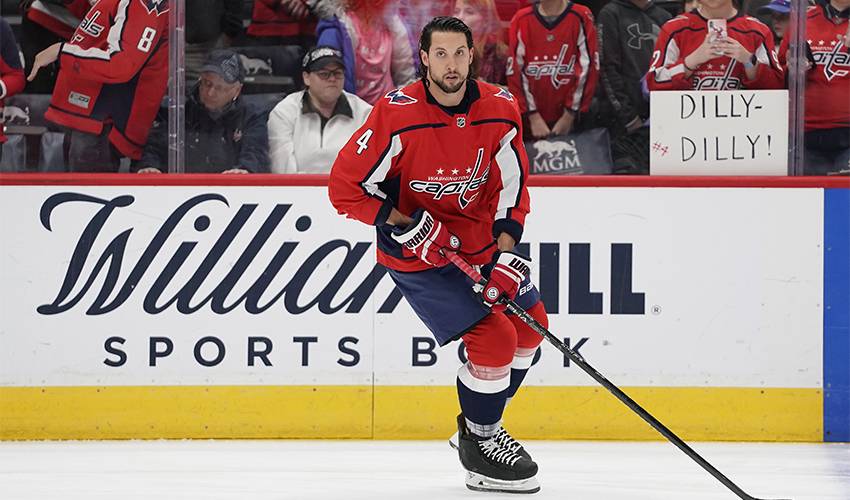 What do the Washington Capitals have with Brenden Dillon in the fold? A rock-solid defenceman and a first-rate teammate.

He’s played just a handful of games with the Metropolitan Division team, but the 29-year-old, who came to the Capitals via a trade with the San Jose Sharks, has already made his mark.

After news broke of his trade to Washington, Dillon didn’t have any expectations as to who might reach out to him from the Capitals.

Let’s just the say the British Columbia native got the message… loud and clear.

“I was definitely pleasantly surprised with the number of guys that reached out when I got traded. I would say at least half the team messaged me, introduced themselves, and welcomed me. T.J. Oshie, Tom Wilson, Braden Holtby, John Carlson… he was one of the first guys who texted me. There were a lot of guys, who are a big part of this team, that took the time to send me a text, and make me feel part of the group.”

His new teammates have definitely made the trade a positive for Dillon.

The former Western Hockey League standout for the Seattle Thunderbirds also saw, first-hand, how the team switches gear from the moment they walk out of the locker room and step onto the ice.

“It’s definitely been hectic, but it’s been a lot of fun. What’s really struck me early on is just how good of a group it is. I genuinely didn’t know anyone on the team – no one from the Vancouver area, no one who I played with before. When I got here, as soon as I went into the locker room for the first time, guys were having fun. There were lots of laughs and big smiles. Guys are all hanging out together. It doesn’t matter if they’re Russian, Swedish, Canadian or American – everyone hangs out. Not only are they having fun in a loose way, but once you step out on the ice, from my first practice to game time, it’s like a switch gets flipped and it’s game on.”

Although he hasn’t had much quality time to soak up the sights and sounds of his new NHL city, Dillon is impressed with what he’s seen so far.

“We had a lot of games in a short period when I first arrived, but when I did get a chance to talk with the guys or go out to dinner – a lot of them seem to live in the same area near the hotel I’m staying at – I got some good advice on some places to go. I had back-to-back afternoon games…and I don’t think I’ve ever had that in my eight years in the league. I could get used to that. After the second game, we had about seven or eight of the guys get together – some brought their significant others – and had a great time. A lot of the places, I haven’t had the chance to check them out yet, but I do know there’s a lot of great spots and things going on here.”

Dillon has discovered that Capitals fans can be found almost anywhere in the city, including the airport.

What gave him away? Two colours, in particular.

“One of the coolest things about being here is as soon as I got into the airport, when I touched down from San Jose, I had at least five or six people come up to me – I’m walking around with a big teal and black San Jose Sharks bag, and about 10 hockey sticks, so I don’t know what gave me away – and they were saying, ‘Welcome to D.C. Welcome to Washington. We’re happy to have you.’ Even when I was out for dinner with some of the guys, a bunch of the people in the restaurant said the same type of thing. It’s been really welcoming. You combine the hockey with the guys, and the city and everything, and it’s been an awesome fit.”

“I’ll be honest, I don’t have any complaints with the music being played. I think the DJ’s they have had so far – I’d give them all five stars.” – All-around music fan, Dillon, on the Capitals locker room music scene.