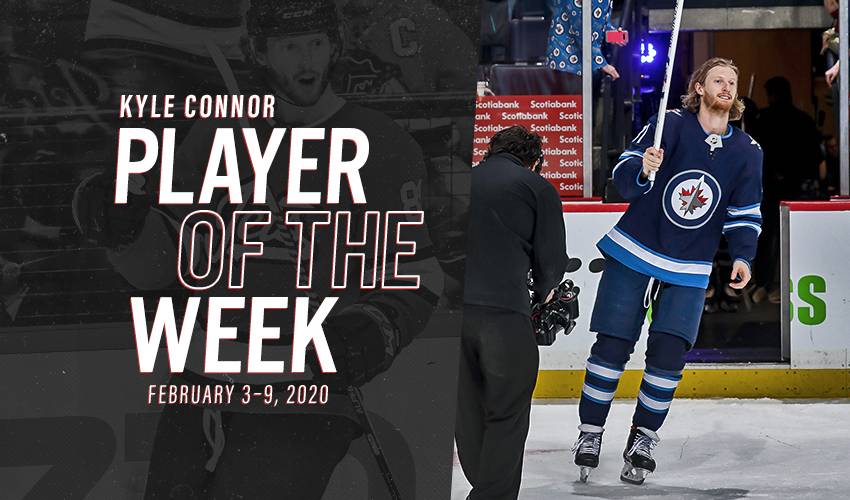 Kyle Connor led the league in scoring for the week with eight points over four games, including seven points split in back-to-back games at home over the weekend to help the Winnipeg Jets reclaim a playoff spot.

His offensive efforts helped Winnipeg move into the top Wild Card spot in the Western Conference as the Jets scored five goals or more in consecutive days for just the 10th time in franchise history.

Connor had four shots on goal as the Jets earned a point in a 2-1 overtime loss to the Nashville Predators at Bell MTS Place Tuesday night.

Connor registered an assist as the Jets earned a 4-2 victory over the St. Louis Blues Thursday night at Enterprise Center.

Up 1-0 in the second period, Connor recorded his 27th assist of the season as he connected with Patrik Laine for his teammate’s 20th goal of the season. Connor got the play started by skating the puck into the zone, then passed it to Scheifele to set up Laine for his signature one-timer.

Jets goaltender Connor Hellebuyck stopped 35 shots as he continued his strong play against the reigning Stanley Cup champions, stopping 73 of 77 shots in the two games against St. Louis this season so far.

Connor registered a goal and three assists as the Jets won their second-straight game with a 5-2 victory over the Ottawa Senators at home Saturday afternoon.

Connor helped the Jets to an early lead with an assist on teammate Neal Pionk’s opening goal. After Ottawa tied the game early in the second period, Connor scored his 26th of the season as he took the pass off the rush to beat Senators netminder Craig Anderson with a wrist shot.

Winnipeg added to their lead as Connor tried to poke in the rebound on the power play before Laine got it past Anderson for his second goal of the game. Connor then tallied his 30th assist of the season as he hooked up again with Laine, who completed his hat trick on the man-advantage.

The four-point effort also matched a career-high for Connor.

"We're a pretty focused group right now," Connor told reporters postgame. "We know what's at stake and we know what it's going to take. We need every point that we can get right now. We're in a battle. Everybody is really focused. We're grinding and we're winning games the right way."

Connor scored two goals and added an assist to help lead Winnipeg to a 5-2 victory over the Chicago Blackhawks at Bell MTS Place on Sunday night.

Down 2-0 in the second period, Connor got the Jets on the board with his 27th goal of the season as teammate Andrew Copp set him up with a perfect saucer pass for a shorthanded goal.

Connor assisted on Laine’s empty-netter before putting the game out of reach with his 28th goal of the season for the final goal of the game, taking a pass from Scheifele all the way down the ice for the goal.

This completed a great weekend for the Jets as they moved into a playoff position with Connor helping lead the way with seven points split between back-to-back games. He also became only the third Jets player to score three points or more in consecutive days.

Connor will look to keep his scoring surge going when the Jets host the New York Rangers February 11, and finish their six-game homestand with visits from the San Jose Sharks February 14 and the Chicago Blackhawks February 16.