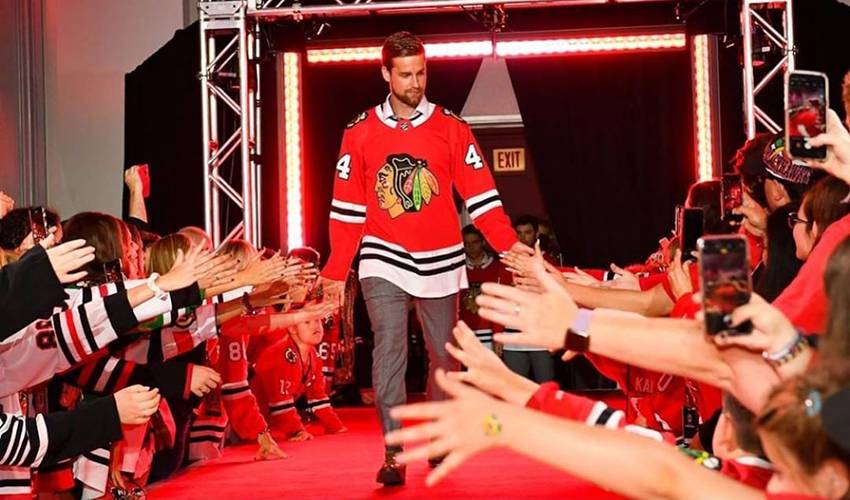 When de Haan, who is closing on 400 NHL regular season games, and three of his friends – Jake Sinclair, Jason Lalonde, and Ryan Grassie – made the decision to open up a brewery bar in their hometown, the collective thought was to make the building something local residents could call their own.

And that’s just what Ridge Rock Brewing Co., which opened its doors in September 2018, has become.

“We’re doing well,” said de Haan, who hails from Carp, a village located about 40 minutes southwest of Ottawa. “It’s been a great learning experience. Most importantly, the people of Carp have really embraced us. That was our ultimate goal when we first started out. That was the vision.”

Named in part for the nearby Canadian shelf rock ridge formation, Ridge Rock Brewing Co. is housed in an 1860s era building that showcases a tap room, retail store and a variety of beers. It has 150 seats inside and another 60 plus on an outdoor patio.

The defenceman, who was traded to Chicago from Carolina this June, is definitely getting by with a little help from his friends.

“There are little speed bumps here and there, obstacles you have to overcome, but my three other partners have done an exceptional job in pretty much doing everything when I’m gone,” said de Haan. “They’re involved more months of the year than I am, but it’s been cool. I never thought business was going to be a hobby. But that’s what it is. The opportunity arose and it’s been a really cool adventure so far.”

It’s been quite an eye-opening journey for the 28-year-old blueliner.

Learning new things about beer and the business world has given de Haan a new appreciation for both.

“It’s quite the complex process when it comes to making beer. Our brewmaster, Jamie Maxwell, is amazing at what he does. He makes really, really good, easy-going, crisp and flavourful beers. Our staples that have been on tap for 10 months are excellent.”

Maxwell’s suds skills have prompted de Haan, who tabs Ridge Rock’s amber beer as his favourite, to broaden his beer horizons, so to speak.

At times, it can even put the player into the role of scout.

“It’s funny,” started the 12th overall pick of the New York Islanders in 2009. “Every time I go somewhere, whether it’s for dinner or to meet up with a buddy, I’m trying different kinds of beers. I want to support the cause and at the same time, it’s great reconnaissance. I maybe take a photo and send it to Jamie. He’s got a bible that’s full of recipes, and he’s open to trying new things as well.”

As for parallels between the hockey world and the beer business, de Haan finds them regularly, often sharing his thoughts at Monday meetings with Ridge Rock owners and staff.

“The four of us like to consider ourselves – along with our manager, our chef, and our brewmaster – the “Dream Team.” It’s kind of like the starting lineup, I guess. Those three people are very good at what they do and we’re lucky to have them, all professionals and people who truly care about Ridge Rock.

“For us, the owners, we always talk and I always relate everything to hockey because that’s all I’ve ever known. If it’s something like marketing or things I’ve seen over the years, things that relate to business, it actually kind of all correlates. I can’t think of a specific example, but when we have those Monday meetings to see how the weeks or months are going, if there’s something I know, I’ll relate it to hockey. It’s what I bring to the table.”

What’s he most proud of when it comes to Ridge Rock?

“That’s a tough one. It might not answer the question, but I’m proud of everything. We opened up last September, which might not be the best time to open with the winter months coming. The way we grinded through… I’m proud of that. We’re still learning. But everyone brings something different to the business. It’s about working to the ultimate goal of being the biggest and best in Ottawa.”