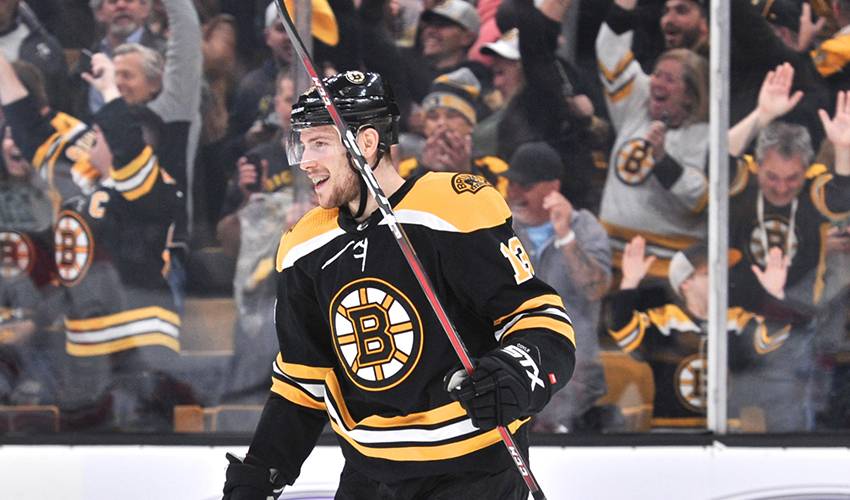 It was on February 20 of this year when Coyle, born in Weymouth, Massachusetts, was dealt to the Bruins from the Minnesota Wild in exchange for Ryan Donato and a conditional fifth-round pick (which was upgraded to the fourth round with the Bruins advancing to the postseason) at the 2019 NHL Draft.

“Charlie brings unique qualities to our team – he is an experienced, productive, two-position player with size, skill and speed," Bruins general manager Don Sweeney said at the time. "Charlie will provide the necessary depth in all areas of our game as we continue to battle for a [Stanley Cup] playoff position."

"Charlie will provide the necessary depth in all areas of our game as we continue to battle for a playoff position. Charlie is a player our entire organization believes can help us now and moving forward.

Fast-forward to the present and Coyle, after recording six points in 21 regular season games with Boston, is playing a huge role in the team’s playoff run.

In 16 games, the 27-year-old has six goals and six assists as part of 12 points to go with a a plus-9 rating. Each one is a career-best mark for Coyle.

On April 25, the centre was front-and-centre in Boston’s Game 1 Eastern Conference Second Round victory over the Columbus Blue Jackets, tying the game in the final five minutes of regulation before ending it in overtime.

By scoring the game-tying and game-winning goals, hometown hero @CharlieCoyle_3 earned Playoff Performer of the Night as he helped the @NHLBruins win Game 1 of their second-round series! The 3-2 OT victory in review: https://t.co/SfU71RQcev #StanleyCup pic.twitter.com/ilTEsGSEGt

Not a bad way to endear yourself to the home crowd.

It was especially sweet for Coyle, who grew up wondering what it would feel like to one day score a goal for his hometown team.

Coyle and the Bruins now find themselves on the cusp of punching their ticket to the Stanley Cup Final. No need to remind him about the pressures that accompany playoff hockey.

“Everything is magnified,” said the former Boston University forward who played two seasons with the Terriers. “It’s tough to keep hockey from being on your mind because it’s what we love to do. You have to try and turn your mind off when you are away from the rink.”

One of the ways Coyle de-stresses is sitting down to watch one of his favourite TV shows.

“I’m a big Family Guy guy,” he told NHLPA.com in reference to the animated sitcom. “I’d probably say that Peter is my favourite character. That’s one of the shows where when you just want to unwind and relax, not really think about anything… Family Guy is an easy, funny watch and you have a good laugh. It’s perfect for that.”

But as he’s done throughout the post-season, Coyle will have his game face on the moment he steps inside the arena.

“It really doesn’t get any better than having the chance to play for the Stanley Cup. You just do whatever you can to contribute. When you get a win at this time of the year, it makes everyone feel great.”

And it makes Charlie Coyle feel right at home.