Jones working to impress Ducks brass on a timeline

His dad played with Hockey Hall of Famers Wayne Gretzky, Dale Hawerchuk and Mark Howe, but Max Jones still received plenty of advice on becoming an elite-level athlete from his mother. 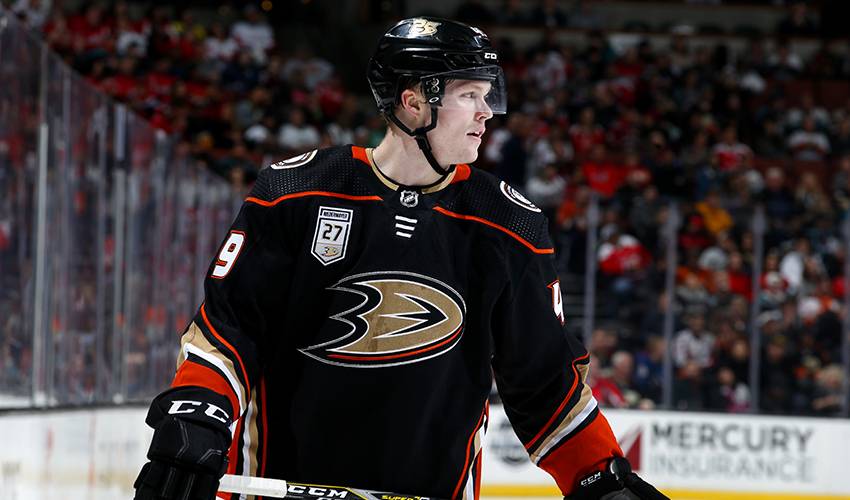 Even though his dad played with Hockey Hall of Famers Wayne Gretzky, Dale Hawerchuk and Mark Howe, Anaheim Ducks rookie Max Jones still received plenty of advice on becoming an elite-level athlete from his mother.

Mary Jones, known as Mary Fischbach during her varsity athlete days at the University of Michigan, was a national championship-calibre diver and helped her son develop a strong mental attitude to deal with ups-and-down in professional hockey.

“Growing up my dad a huge impact,” said Max, a six-foot-three, 210-pound left wing. “It was hard not to be influenced [by his dad] with him being a pro. He would work with me a lot on the on-ice stuff, keeping my body in shape and teaching me about stuff like my spacial awareness on the ice.

“My mom helped with my mental game. Hockey is a game that is played a lot in the head.”

Mary and Brad Jones met at the University of Michigan in the mid-1980s. Brad played four seasons for men’s hockey team, the last three under the legendary head coach Red Berenson.

Brad Jones was selected in the eighth round (156th overall) by the Winnipeg Jets in 1984. He wound up playing a combined 157 regular-season and playoff games for the Jets, Los Angeles Kings and Philadelphia Flyers.

Mary was on the diving team for four years at Michigan. She became the first female NCAA diving champion from her school, winning the one-metre and three-metre events as a senior. In total, she was a seven-time NCAA All-American as well as the 1988 Big Ten Diver of the Year.

Mary also was on the U.S. National team for 10 years and was an alternate for the 1988 Olympic team. In 1992, she was named to the Big Ten's All-Decade women's diving team and named to the University of Michigan Hall of Honour in 2017.

Max had a taste of life in Ann Arbor when he spent the 2014-15 season with the U.S. national team development program before it relocated to Plymouth, Michigan, the next year.

Despite all these connections to the University of Michigan, it was surprising Max decided to travel the major junior route and play for the London Knights in 2015.

“My parents told me the decision was up to me,” Max said. “We made a list of pros and cons. Both my mom and dad went through the list with me.

“I chose London because I felt it best suited my game, my size. It was closer to the pro game. It was the right decision for me at the time.”

Jones scored twice, including the game-winner in the 5-2 preliminary round outing against Rouyn-Noranda Huskies, and set up two more goals in the Knights' four games at the Memorial Cup.

It was a few weeks later Anaheim selected Jones in the first round (24th overall) of the draft.

A hand injury wiped out his training camp with the Ducks last fall. But once healthy he played well for the AHL San Diego Gulls and merited a promotion to the Ducks in mid-January. He registered his first point on a power-play goal from Jakob Silfverberg in a 4-0 win against the Minnesota Wild on Feb. 19.

Jones knows he is destined to rejoin the Gulls for their playoff run. In the meantime, he’s out to make an impression on Ducks brass.

“There is more to the game than goals and assists,” Jones said. “I want to play well defensively and create chances and space in the offensive end. That’s the way you get noticed.”