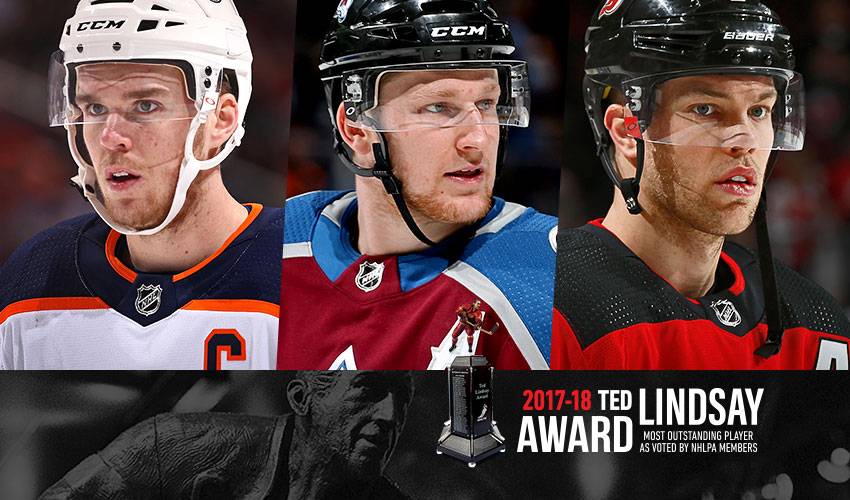 TORONTO (April 26, 2018) – The National Hockey League Players’ Association (NHLPA) announced today the three finalists for the 2017-18 Ted Lindsay Award (TLA): forwards Taylor Hall of the New Jersey Devils, Nathan MacKinnon of the Colorado Avalanche and Connor McDavid of the Edmonton Oilers. The TLA is presented annually “to the most outstanding player in the NHL,” as voted by fellow members of the NHLPA.

McDavid is seeking to become the first player to receive the TLA in consecutive seasons since Sidney Crosby (2012-13, 2013-14), while Hall and MacKinnon are each looking to become the fourth consecutive first-time recipient. The 2017-18 TLA will mark the 17th time in the Award’s 47-season history that a previous No. 1 overall draft pick has been named the most outstanding player by his peers.

The three TLA finalists (listed below in alphabetical order) received the most votes from their fellow players based on their 2017-18 campaigns:

Hall, of Calgary, Alta., Canada, played in 76 regular-season games to help the New Jersey Devils to their first Stanley Cup Playoffs berth since the 2011-12 season. The 26-year-old tied for ninth in the league in goals (39), ranked sixth in points (93), tied for fourth in multi-point games (27), placed fifth in power-play points (37) and averaged the seventh-most points per game (1.22). The Devils’ alternate captain recorded career-high totals and led the team in every major offensive statistical category, notably scoring 41 points more than his next-closest teammate. Hall recorded at least one point in 26 consecutive appearances (18-20–38) from Jan. 2 to March 8. As a first-time finalist for the TLA, Hall is looking to become the first Devils player in franchise history to be named the most outstanding player by his peers.

MacKinnon, of Cole Harbour, N.S., Canada, played in 74 regular-season games for the Colorado Avalanche. The 22-year-old led Colorado with career highs in goals (39), assists (58) and points (97) to help his club make the playoffs for the first time since 2013-14. MacKinnon finished the season fifth in points and tied for ninth in goals, while co-leading the league in game-winning goals (12). The Avalanche’s alternate captain tied for fourth in multi-point performances (27) and shared the league-lead in multi-goal games (9). He also finished second in points per game (1.31) – just .01 behind McDavid. MacKinnon is a first-time finalist for the TLA and is looking to become only the second Avalanche player (Joe Sakic) to be named the most outstanding player by his peers.

McDavid, of Richmond Hill, Ont., Canada, played in all 82 regular-season games for the Edmonton Oilers, for the second straight season. The Oilers’ captain led the league in points (108) to win his second consecutive Art Ross Trophy, while recording the third-most assists (67), scoring the sixth-most goals (41) and placing first in points per game (1.32). McDavid led the NHL in multi-point games (32), as well as even-strength goals (35), assists (49) and points (84) – finishing with 18 points more than the second-ranked player in the latter category. Among league forwards, he finished fourth in average ice-time per game (21:33). Last season, the 21-year-old became the third Oilers player (Wayne Gretzky, Mark Messier) to be named the most outstanding player by his peers. McDavid is looking to become the first player in the history of the TLA to receive the players’ Award twice before the age of 22.

The Ted Lindsay Award (TLA) is unique as the only award voted on by the players themselves, carrying on the tradition established by the Lester B. Pearson Award in 1970-71. Reintroduced in 2009-10, the TLA honours Ted Lindsay – its namesake – an All-Star forward known for his skill, tenacity, leadership, and role in establishing the original Players’ Association. NHLPA members vote annually on the player they deem to be the most outstanding in the NHL regular season.