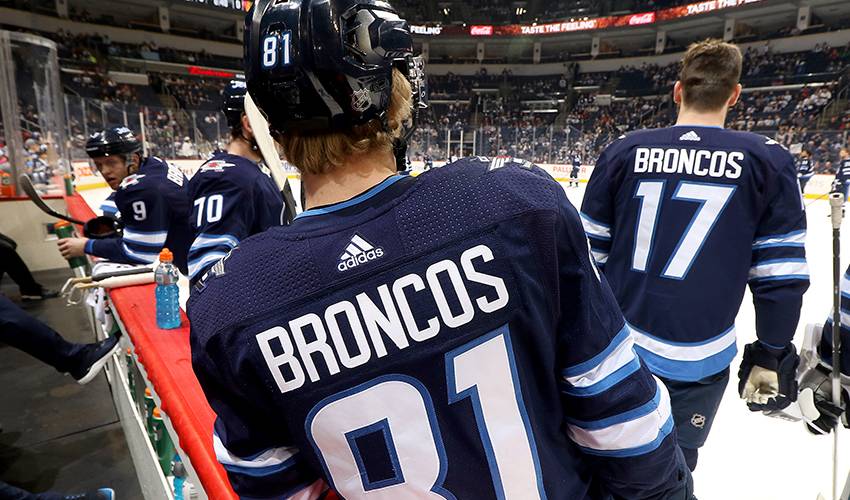 As he stood in the face-off circle, side-by-side with his teammates and Chicago Blackhawks players, all observing a moment of silence for the 15 who died and those that were injured in the bus crash involving the Humboldt Broncos junior hockey team on April 6, two thoughts crossed Connor’s mind.

“It’s tough to realize what happened and you feel for all those families,” said the 21-year-old of the accident that occurred at a highway intersection in east-central Saskatchewan. “Everyone around the hockey community knows someone that is connected there and is affected by that. And that moment before the game, it really showed just how tight-knit the hockey community is. Those were the two things I was thinking about it when I was standing there and the arena was silent.”

Like everyone on both teams – each player’s last name replaced with ‘Broncos’ on the backs of their sweaters – Connor knew he had to put any thoughts of grief on hold for a few hours.

“I think everyone, the players and the fans, realized that we had to play a game,” said the Michigan native. “You have to flip that switch and you have to be ready to go.”

Connor certainly was in the 4-1 Jets win.

He scored his 31st goal in Winnipeg’s regular season finale to finish the campaign with the most goals among NHL rookies.

“Throughout the whole season, everyone strived to get better and pushed each other,” offered Connor. “We have a competitive group. I thought the guys really enjoyed that last game. End the season on a good note.”

After beginning the season with the Manitoba Moose in the American Hockey League, Connor, selected 17th overall by the Jets in 2015, was recalled early on after a rash of injuries to the Winnipeg lineup.

The 6-foot-1, 182-pounder made the most of his opportunity. Averaging 16:54 of ice time, he recorded 57 points and contributed seven game-winning tallies.

“I think I had a good off-season,” started Connor. “I really came into the year prepared and I wanted to get better.”

And now he has the Stanley Cup Playoffs to look forward to.

But before Winnipeg takes on Minnesota in their Western quarterfinal set, Connor, at least for one day, gave his mind and body some rest from hockey.

“I’m actually watching the final round of The Masters,” he said on Sunday. “We have an off day today, so it’s a time to relax and take your thoughts away from hockey for a bit. Of course, you are still thinking about all those affected by the Humboldt tragedy.

“On Monday, we’re going to be focusing on Minnesota and dialing it up. We’ll be doing everything you have to do to be prepared for the series. That’s our approach. Everybody here – there’s a buzz around the city. Everyone here is excited, including myself. It’s going to be fun. It’s going to be hard work, but this is where you want to be at this time of the year.”