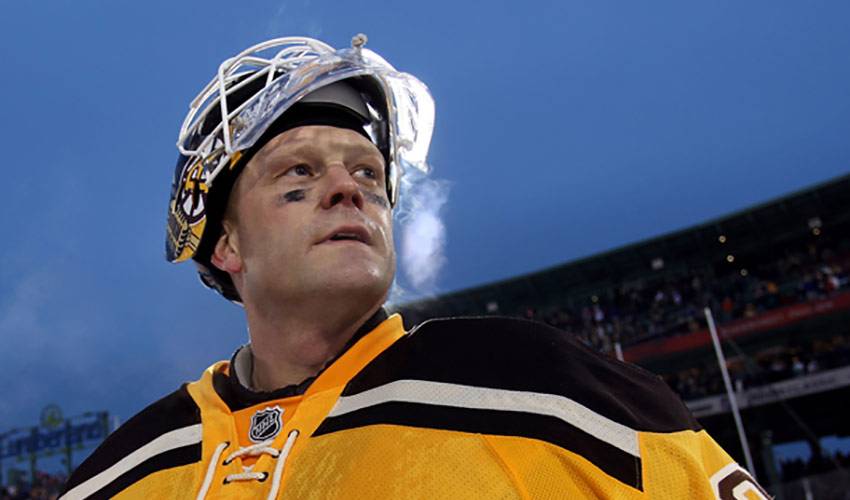 On New Year's Day, there was just no doubting Thomas.

Other than notching a shutout or perhaps finding his name on the scoresheet, January 1, 2010 provided Tim Thomas with some of the most memorable moments in his hockey career.

The Boston netminder's day kicked off in style with the news that he was one of the goaltenders selected to play for Team USA at the upcoming Winter Olympics in Vancouver.

Hours later, Thomas, who was raised in Flint, Michigan, was front and centre in the Bruins 2-1 overtime victory against the Philadelphia Flyers in the 2010 Winter Classic at historic Fenway Park in Boston.

“I found out this morning, but obviously I had to keep it quiet, which is good, because I was able to control my emotions,” said Thomas, of his Olympic nod. “I think I would have been a blubbering mess on national television if I would have found out right before.”

Fortunately, Thomas was able to keep his excitement in check against the Flyers, who appeared destined for a win until late-game heroics by Mark Recchi and then Marco Sturm, gave Boston the win in front of the hometown fans and a much-needed two points.

But Thomas was also a major factor in the extra-frame victory, coming up huge in the late stages of the contest, denying two of Philadelphia's top scorers in close.

“(Daniel) Briere was coming down on the two on one,” recounted Thomas. “Obviously, he had the time to be very patient, so I was just doing everything I could to stay with him and not let him score.

“After the puck went, after that shot and the rebound went behind the net, that's actually where I can't tell you the story any more because it became pure reflex and just doing anything I could to make the stop. I don't have a picture of it right now. I'll have to watch the replay myself.”

Minutes after Sturm scored the game-winning marker, Thomas came back on the ice for the announcement of the U.S. Olympic roster, this time wearing a Team USA jersey.

Could he ever have envisioned a day like this one?

“Just this whole day overall, this will go down as one of the most memorable days of my life and my career,” said Thomas. “Between winning and the way that we won, and being named to the U.S. Olympic team, as I've said before, I've been waiting 30 years for this.”

A remarkable feat, especially for a goaltender that at one time in his career appeared destined to play the game for a long time, but not in the NHL.

“I think I had pretty much given up on it, knowing, realistically, if you're playing the rest of your career in Europe, which is what I thought at one point I was going to be doing, that you're probably not going to make the Olympic team,” admitted Thomas. “There are goalies in the NHL that are going to get first dibs because they are playing in the highest league in the world.”

One in which Thomas certainly belongs.

Playing collegiate hockey for the University of Vermont for four years from 1993–1997, during which he was selected 217th overall by the Quebec Nordiques in the 1994 NHL Entry Draft, Thomas suited up for several years in the minor leagues and Europe before emerging as the Boston Bruins' starting goaltender.

A two-time NHL All-Star, Thomas was the winner of the 2009 Vezina Trophy as the league's best goaltender.

In the early stages of 2008-09, Thomas became the first Boston backstopper to record consecutive shutouts since Byron Dafoe achieved the feat in 1999, winning 1-0 games against the Edmonton Oilers on October 27, 2008 and the Vancouver Canucks on October 28.

Thomas' overall shutout streak came to an end the next game at 154:43 minutes in against the Calgary Flames on October 30. He was chosen to play in his second All-Star Game in 2009, and was once again the winning goaltender for the Eastern Conference, beating the Western Conference 12–11 in a shootout (the first time the All-Star Game required the tie-breaker since 2005) a month later, on February 26, 2009, Thomas recorded his 100th NHL win, a 6–0 blanking of the Anaheim Ducks.

The man known as ‘Tank' hopes things can only get better.

After sporting the best record in the Eastern Conference in 2008-09, Boston qualified for the playoffs for the fifth time in nine years, facing the Canadiens in the playoffs for the fourth time during that span, defeating them in a four game sweep before losing in seven games to the Carolina Hurricanes in the conference semifinals.

“Coming off a best season, expectations are very high,” offered Thomas. “I haven't had the win/loss record that I had last year, but I think at times I've been playing really well and I've been working really hard to get back to the level that I was at last year, and I don't think I'm too far off.”

His ‘Classic' effort to ring in the New Year suggests Thomas is definitely on the right track.