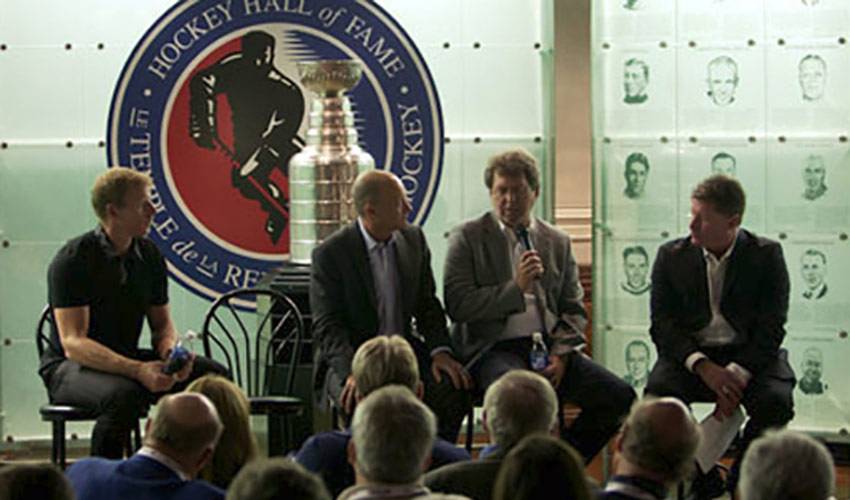 Junior development in the world was the subject for the afternoon session of the World Hockey Summit's second day, with Jim Hughson leading an international panel on a discussion at the Air Canada Centre in Toronto regarding what is working, and what is not, in junior hockey. With Canada, the United States, the Czech Republic, Sweden and Slovakia all represented on stage, each panelist and speaker was able to detail how their national junior programs are thriving or, in the case of others, struggling.

The main speakers for the junior development session were both from the IIHF – Murray Costello of Canada and Slavomir Lener of the Czech Republic – and they were able to open the discussion from two different sides of the spectrum. Canada's junior program has never been better, while Lener went into great detail to describe the trouble facing the Czech Repbulic's model, which has a similar plight to how other European countries have recently fared.

Fighting for attention on the European landscape of sports with soccer, Lener described a finely balanced give-and-take relationship between the league and Europe. “The NHL is important for Europeans and European hockey,” Lener added, suggesting that European players bring a different style and flavour to the league and add to the NHL in a unique way, with an increasing trend towards European players in the league proving that players from across the Atlantic have a definite place in North America.

Lener went on to describe how recent history has trended towards more and more European players being selected in CHL import drafts, and how some agents are encouraging European players to leave for Canada, citing CHL exposure as the best way to get drafted into the NHL. Lener provided evidence from this past decade to the audience that showed a rapidly declining numbers of Czech and Slovakian players both being drafted into the NHL and holding roster spots in the league.

Lener suggested that a much more patient approach to player development would benefit everyone involved; the players themselves; the European programs that develop them – who are otherwise discouraged to spend money on their programs when their 16, 17 and 18 year old players leave for North America and then receive no compensation for losing them; as well as the NHL, who would prosper from having more polished, mature European players when they eventually join the league.

Sweden's Tommy Boustedt of the IIHF had much to agree with Lener on, citing that in the fight for popularity with soccer in Europe, the NHL is a huge factor. He continued on Lener's point regarding the diminished programs of the Czech Republic and Slovakia, using them as examples of what can happen when too many young players leave home for the United States and Canada. Now in an era where instant gratification is demanded more and more in all aspects of life, Boustedt explained that this is simply not possible in junior hockey, saying “everybody wants it, but you can't speed up development.”

While finishing up, Boustedt described two particular areas of trouble to the European junior development system and proposed two suggestions on how to fix them. The first was in regards to the CHL's recruitment of underage imports from Europe, a trend that has skyrocketed in recent years. The second problem area dealt with the NHL/NHLPA Collective Bargaining Agreement and its limited two-year window to sign European players who have been chosen in the Entry Draft. Boustedt's recommendations to fix these problems and keep more young players at home developing in their native country were simple: limit CHL teams to only one roster spot for import players and change the two-year window to four years.

Jim Johansson and Tom Anastos of USA Hockey were the first to bring the discussion back to North America, both going into detail of what USA Hockey has done right since taking a strong direction with the development program in 1996. Listing several key aspects that he feels defines USA Hockey's recent approach to its junior players, Johansson mentioned the following; 1) A strong blend of full-time academics with athletics for juniors between the ages of 16-21; 2) Off-ice strength and conditioning training that is specifically tailored to game schedules; 3) Teams that are comprised of players all in the same age group, giving them competition against the best from each bracket and avoiding the splitting of the team between veterans and rookies.

“It used to be that we'd only talk about the three M's – Minnesota, Massachustes and Michigan,” Johansson said. “That's not the case anymore. It was up to us to change that and to draw in players from all over the country – to give them a reason to want to pick us.”

His colleague from USA Hockey, Tom Anastos, furthered Johansson's points, saying that the combination of athletics with scholastics allows players of the U.S. National Development teams, USHL and NCAA to “grow skill levels and maturity levels at the same time.” A former member of the Michigan State Spartan hockey team in the NCAA, Anastos mentioned that he remembered playing against Kelly McCrimmon, the CHL's panelist on stage, while he was with the Michigan Wolverines, and now looks back on the collegiate player pool as having evolved from being mostly Canadian, with limited American participation, to the reverse where more Americans are populating teams with fewer and fewer Canadians.

McCrimmon, now the owner, general manager and head coach of the CHL's Brandon Wheat Kings in the Western Hockey League, followed Anastos by speaking to the strengths of Canadian junior development system and its continued success over the years. Over half of the players drafted in the 2010 NHL Entry Draft came from the CHL, McCrimmon began, while also crediting the system for supplying most of the players who end up playing on national teams, from the World Juniors to the Olympics.

The reasons McCrimmon cited for these were many, saying that the league is “always working towards a better player experience.” The competitive advantages McCrimmon listed were that the CHL mirrors the NHL game very closely, in terms of the arenas, the rules, the schedules and travel. The vast majority of the world's best players in the junior age brackets play in the CHL, McCrimmon explained, giving the players of the WHL, OHL and QMJHL the best exposure to top-flight competition.

McCrimmon also mentioned that there has been tangible improvement in the quality of coaching in the CHL, as evidenced by the large number of current NHL coaches who got their start in juniors, as well as NHL coaches who come back to coach in junior. He finished by also explaining that the league does not get enough credit for the commitment they show in trying to provide education to their players, a common complaint levied upon a league that is accused of catering more to the NHL than educations.

Darcy Regier, the general manager of the NHL's Buffalo Sabres, gave the professional league's take on the matter, with his stance being that the NHL pulls players from all of these leagues and that whatever is best for the development of each particular player should be the best way to choose, claiming that players need to have the right to choose to make a living, and how best to get to that point.

“We're all working in a very competitive manner and a very compressed manner,” Regier said. “NHL teams just want to help give the player the best opportunity to be successful. We all believe players have to have the ability to work on skills where they want to, whether they're Russian or Czech, and when they get the NHL, that's when we'll all be beneficiaries. We want the best athletes to choose hockey and to want to play hockey, and we want the fans to have a good product to pick. That's what everybody wants and that's when we all win.”

Murray Costello had one of the final words of the day on the matter, stressing the common theme of the seminar that each of the national development strategies has its strengths and weaknesses, and that it should not be about competing against one another for players. Strong junior development in all hockey countries can be mutually beneficial, with the game itself seeking to gain the highest reward with talented players coming from all across the world instead of a select few.

“It shouldn't be us taking the last great Slovak player and bringing him over here,” Costello said. “We should be leaving their good players develop there, be patient and then we're all the better for it.”