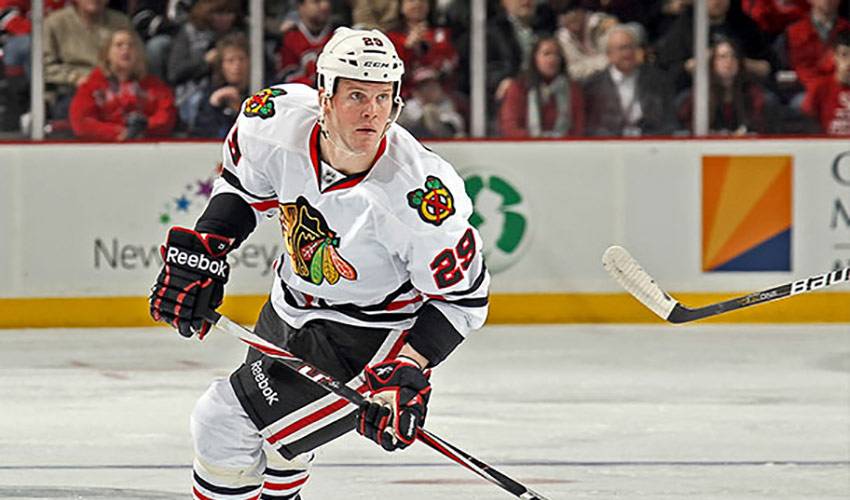 Whether it’s casting a line or delivering a hit, Bryan Bickell is determined individual.

When he’s not lining up an opponent for a well-timed check as a member of the Chicago Blackhawks, the 6’4, 225-pound Bickell jumps at the chance to take in some bass fishing. “I love it,” said the 26-year-old Bickell, of his longtime hobby. “I do it as much as I can. I’m good with that, but I think my fiancée sees it a little differently.” During the hockey off-season, Bickell can often be found in the early morning hours on Otonabee River, a picturesque body of water that flows through Peterborough, a city of roughly 135,000 located about 85 miles north of Toronto. As a kid, Bickell and his father would often go fishing. It was a family friend who introduced Bryan to bass fishing. And (excuse the pun), he’s been hooked ever since. While he doesn’t always reel in what he’s in search of, it’s not just about the big catch for the 41st overall selection in the 2004 Entry Draft. “To be out in nature, away from all the noise, the sounds of ambulances or police cars, it’s really a different world,” said Bickell, who skated and scored in his first NHL game on April 5, 2007. “You see all different types of birds. You see so many great things. It settles you down.” It’s a stark contrast from his NHL life and a demanding role. Bickell, who skated in four Ontario Hockey League seasons, the majority of those with the Ottawa 67’s and 26 games with the Windsor Spitfires, is a do-it-all sort, a player that can make an impact on the scoresheet or with his physical presence. “Everyone that plays this game, we all want to score,” said Bickell, who had two goals in a recent win against the Minnesota Wild. “But when that doesn’t happen, you hope your other skills come out. If I can keep the defence on their toes, that’s just as important.” So, too, is making sure no one takes liberties with his teammates. “You have to gauge every situation,” offered Bickell. “You don’t want anyone going after your best players. You do what you have to. I know the guys here appreciate that.” Chicago put together one of hockey’s most impressive winning streaks. When the Blackhawks lost 6-2 to the Colorado Avalanche on March 8, it marked their first loss in regulation and ended their 24-game streak in which they earned at least one point, an NHL record to start a season. The streak was the third-longest in league history. There was a bigger plan in mind, however, when the 2012-13 campaign got underway. “It’s all about winning the Stanley Cup,” said Bickell, who celebrated a Cup win with the ‘Hawks in 2010. “That’s what we all play for and that’s always the goal.” The perfect script for Bickell would see him hoist the silver trophy over his head and then recollect the moment on a picture-perfect summer’s day on the water. “I suppose hockey and fishing do their have their similarities,” he noted. “In both, when things aren’t going your way, you have to be patient and stick with it. If you do that, usually good things will happen.” For Bryan Bickell, part-time fisherman and full-time forward, they most certainly have.