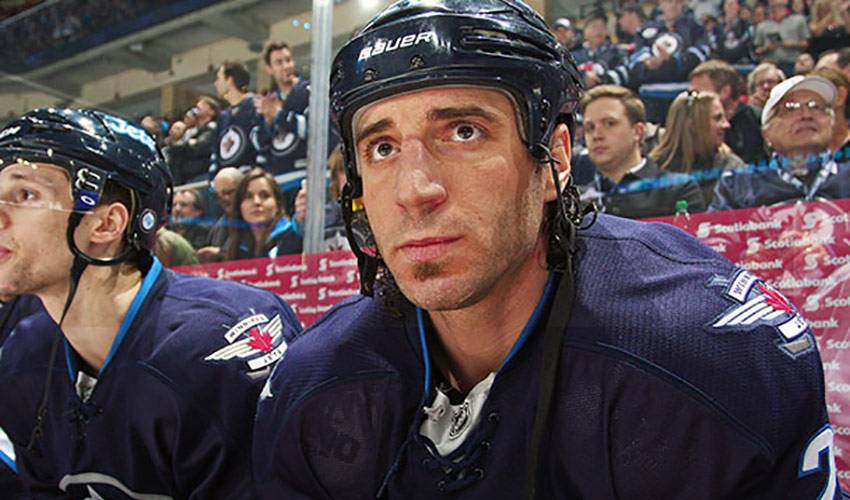 A Wal-mart. A roll of toilet paper. An autograph request. It was the moment Chris Thorburn truly realized just how much of a hockey city Winnipeg is.

He had experienced the exuberance of Jets’ supporters on many occasions. There had been requests for his signature at restaurants, coffee shops and gas stations. But this one in particular is something the rugged forward still chuckles over. “I was out with my wife at Wal-mart last year and we were buying some groceries,” recalled the 29-year-old winger, now in his eighth NHL season and second in Winnipeg. “A guy recognized me, comes over and asks, ‘Could you please sign this?’ It was a roll of toilet paper. He didn’t have anything else, so that’s what he wanted signed.” Always one to oblige, Thorburn took a pen out and signed his name. “Of course I did,” he laughed. “All it did was reinforce what you already knew about Winnipeg – the fans are amazing. They are passionate, but they are polite. If you are out having dinner, people wait until you take your last bite before they would even think of asking you for an autograph. We’re pretty lucky when it comes to our fans.” Something Thorburn was again reminded of during a recent open practice, in front of 3,000 fans. Certainly nowhere close to a sellout at MTS Centre, but impressive considering those in the seats were on a waiting list for season’s tickets. Again, it came as no surprise to Thorburn. “You heard all about the people of Winnipeg, well before the franchise was relocated back here from Atlanta,” said the 50th overall selection of Buffalo in the 2001 Entry Draft, in regard to the move to Winnipeg prior to the 2011-12 season. “And then you get here and it’s just unbelievable. When you come out before the start of the game, it’s downright crazy. You can’t believe the noise.” Imagine then just how much more the place would be amped up if the Jets made the playoffs. It’s certainly crossed Thorburn’s mind on more than a few occasions. There is, however, the matter of getting to that particular point. That’s also something Thorburn has thought of more than just once. “It hits you every now again, that thought of what it would be like to play a home game here in the playoffs,” offered the 6’3” 230-pounder. “It would be wild.” If it sounds like Thorburn feels right at home, he is. Born in Sault Ste. Marie, Ontario, the veteran of nearly 475 NHL games sees plenty of similarities between the two cities. “Both places are very blue-collar and I think there is an appreciation and respect for those who are honest, hard-working people,” he said. Someone just like Thorburn. And though he’s known for his gritty and grinding ways, he’s happy to acknowledge that he’s garnered attention, lately, for something else. “Well, I scored a goal a few days ago, so maybe I should focus my attention on doing that a little more,” he quipped, noting his tally from an April 11 game against Florida. “Usually, people know me from the marks on my face. Maybe I can change my reputation a bit.” That might not sit too well with a fan base that extends all the way to his home. “My son (Bennett), he’s two and a half and he’s pretty good at chanting ‘Go Jets Go!’” said Thorburn. “He can do a pretty good first pump, too.” There haven’t been, at least not for now, any strange autograph requests from his son. Not that Chris Thorburn minds that kind of thing.