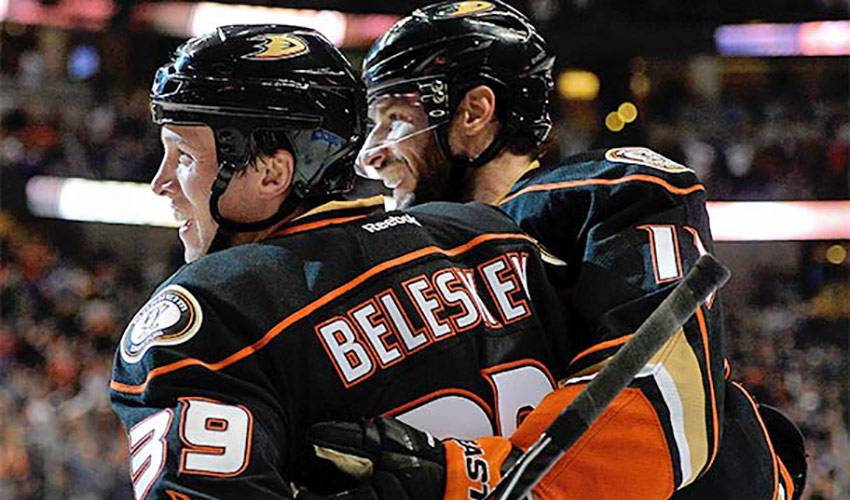 It would be easy to understand if the voice that greeted you on the phone would be tinged with disappointment. Yet, despite being on the sidelines since mid-February, Anaheim’s second-leading goal scorer sounds optimistic as he nears a return to game action.

“I would say the mental part of dealing with it has been the toughest,” Beleskey told NHLPA.com. “Obviously, it’s no fun at all. Not skating with the rest of the guys, keeping your chin up, some mornings it feels like it’s Groundhog Day, just that feeling that you are doing the same thing over and over again.”

Despite his absence from the lineup, the 26-year-old forward has made his presence known in 2014-15. He already has reached an NHL-career best with 21 goals, including eight game-winning markers, ranking him second in that category.

Seeing the Ducks duking it out for top spot in the Western Conference has certainly buoyed Beleskey’s spirits.

“That’s one thing that has made all of it a little easier to deal with,” said the former 112th overall pick in the 2006 Entry Draft. “The team is doing well, the guys are playing great, and hopefully, it all sets up for a long playoff run.”

Aside from the rest and readying himself for a return, Beleskey has turned to one of his favourite hobbies to combat the tedium of not playing.

“I play the guitar every day,” he said. “It’s something I really enjoy doing. It doesn’t matter what kind of music, really. I’m on big blues/folk kick right now.”

His top priority, however, is in replicating the same standard of play he set once he returns to the fold.

“When I came into the season, I really wanted to focus on not second-guessing myself out there,” noted Beleskey, who has appeared in 320 career games, all with Anaheim. “If you second-guess, it’s not going to do you any good in the NHL. You have to play a simple game. You hear that from the time you start playing. But, it’s not always easy to do it.”

“When you are around a player like (teammate) Corey Perry for 6-7 years, you notice what he does, how hard he goes to the net, how he puts himself in position to produce good scoring chances, and how that approach works,” he continued. “I’ve tried to do that, to take more shots, to put myself in good spots.”

It’s a formula that’s paid off handsomely for Beleskey and the Ducks.

As for a possible musical career, or an appearance on America’s Got Talent, that will have to be put on hold for a while.

“Well, I can’t sing, so that’s a strike against me,” joked Beleskey. “Maybe I’ll just float it out there that I play the guitar. You never know what can happen.”