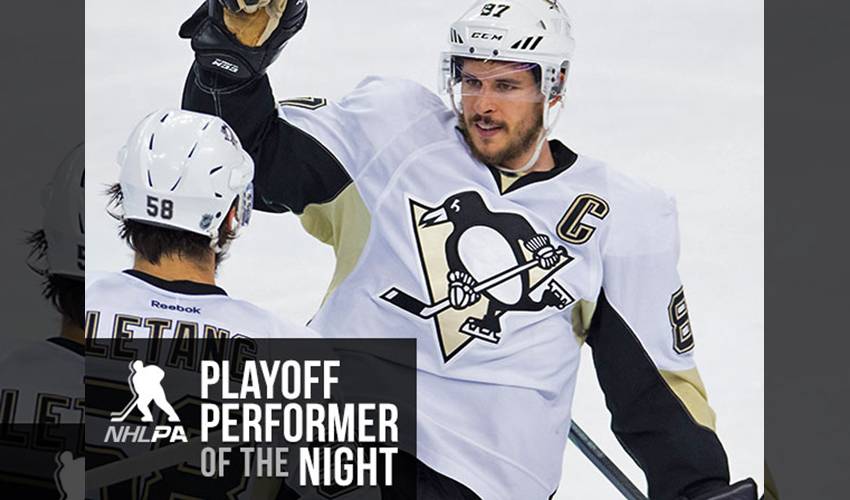 Sidney Crosby skates off with PPOTN honours after scoring the OT winner as Pittsburgh took Game 2 of the Eastern Conference Final.

The captain ended the contest early, lighting the lamp just 40 seconds into the extra frame for the 3-2 win.

STAT PACK: Crosby took six shots on goal, dished out five hits, had one takeaway, and took 27 shifts for 18:07 of ice time.

A FIRST FOR SID: “It feels good to get rewarded,” said Crosby, who netted the first overtime playoff winner of his NHL career. “I feel we deserved it tonight.”

STATE OF MIND: “I thought we just had the right mindset going into the third,” said Crosby. “We played on our toes. We were aggressive. It's a 2-2 game, and I think we just had the right mindset, and I think everyone just kind of helped each other create momentum and making it easier on the next line that went out there to hopefully get out there against a tired group or get them on their heels a bit, and we were able to finally get one there in overtime.”

AWESOME AWARD: On what it means to win the Ted Lindsay: “It means a lot. It’s a huge honour to win this, one where you’re recognized by the guys you compete against every night. I have a great appreciation for that.”

WHO IS THAT MASKED MAN?: His father Troy was a goaltender for Verdun of QMJHL and was drafted by Montreal in 1984.

HONOURABLE MENTIONS: Matt Cullen and Phil Kessel each had a goal for the Penguins. Kris Letang and Brian Domoulin were both a plus-2. Jonathan Drouin and Anton Stralman each tallied for Tampa Bay.