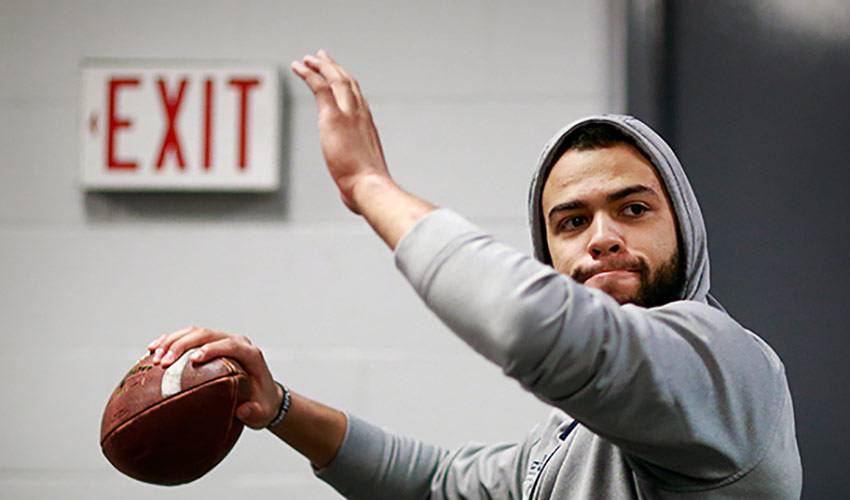 When the final buzzer sounds after an Edmonton Oilers home game, the post-game interviews are over, and he’s said his goodbyes, the 21-year-old Nurse, in his second big-league campaign, already has a plan in place once he gets in his car.

“What I’ve been doing for a while now is putting on some Teddy Pendergrass music and listening to that on the way back to the condo,” said Nurse, in speaking of the late American singer, songwriter and composer.

An appreciation passed along from his uncle, former NFL quarterback Donovan McNabb.

“It’s something my uncle did and it’s something he shared with me. It’s a great way for me to collect my thoughts after a game. It’s the first thing I do after I start the drive home.”

When he’s not lip-syncing a Pendergrass tune, Nurse indulges in two other favourite non-hockey pursuits when he’s away from the rink.

“I love food,” noted the seventh overall selection in the 2013 Entry Draft. “I really enjoy trying out new places. I’m not too bad in the kitchen, but I do get a little lazy when the season is on. I like to play video games, too. Usually, it’s Call of Duty.”

Hockey, however, is never far removed from his thoughts.

Part of a young Oilers group eager to experience post-season hockey, Nurse came into the 2016-17 campaign looking to build on his contributions.

The physically punishing blueliner, who skated in 221 regular season games with the Ontario Hockey League’s Sault Ste. Marie Greyhounds, hopes it pays off in the win column.

“We want to continue to grow as a team and I want to continue to grow my game,” offered Nurse. “We’ve had a lot of excellent additions to the team and everyone came into the season feeling confident and up for the challenge. For me, it’s about things I can do in my own zone, being in the right area and making plays to get the puck out of our end, not trying to force things, but being someone who is hard to play against.”

The 6’4”, 215-pounder has been just that so far - patient with the puck, steady in his own end, while utilizing his size to keep the opposition on their toes.

“I feel comfortable out there,” said Nurse. “With this team, we have a belief in ourselves as a group and in one another.”

There’s no doubt every Oilers player feels the pressure of netting a playoff spot. It’s something the team hasn’t achieved since 2006, the year they went to the Stanley Cup Final.

With 20 per cent of the NHL season in the books, Nurse knows there is still plenty of important hockey to be played.

“It’s a long season - there’s going to be ups and downs - but this is a great group, and everyone is committed to making it a success.”