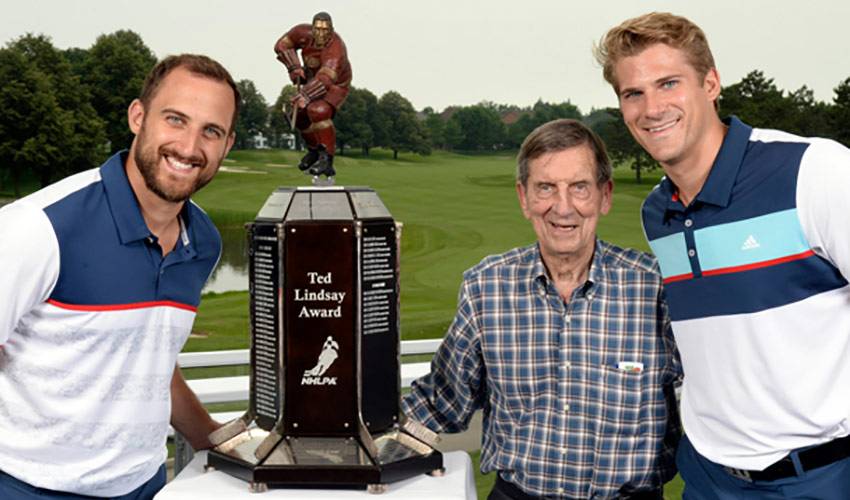 There was a time when Nick and Marcus Foligno would tee off, literally, on one another.

On a Wednesday afternoon at Glen Abbey Golf Course in Oakville, ON, NHL-playing brothers Nick, 29, and Marcus, 25, brought their now friendly sibling rivalry to the annual NHLPA Golf Classic.

Less than half an hour before the start of the 25th edition of the annual summer gathering that brings out a mix of current and former NHL players, the Folignos are getting ready to hit the driving range.

It’s a good bet the sons of former NHL forward Mike Foligno would have been keeping tabs on one other throughout the afternoon, even if they weren't participating in the same foursome.

“It’s funny,” started Nick, captain of the Columbus Blue Jackets. “I think one of the biggest reasons Marcus and I are where we are is because of how competitive we were with one another growing up.

“I forget sometimes that he’s four years younger than me,” continued the left-winger, who is four games shy of 700 for his NHL career. “He was always such a big kid. I remember the days when I’d pound on him, and then one day it was the other way around. Things just switched.”

That’s just how Marcus, who played the first 347 games of his NHL career with Buffalo before a late June trade to Minnesota, recalled it.

“Once we got to the NHL, I think that’s where it probably ended,” offered the left-winger taken 104th overall by the Sabres in 2009. “There was a time he definitely had the upper hand, but then he realized he was looking up at me, so it changed pretty quickly.”

Dust-ups are a thing of the past. Competition between the two is not.

On the greens, on the waters, in the gym or on the ice, the brothers both admit to trying to gain the upper hand whenever they’re together.

“Golfing, training, play against one another – it’s always there,” said Marcus. “But it’s fun to come out here and play in this event. It’s just always good to have a chance to spend time with your brother.”

While it would be easy to assume the brothers talk a lot of hockey during the off-season, that’s not the case.

They do discuss the game, but it’s not a big topic of conversation between the pair.

“We like to just hang out together,” noted Nick. “We like to golf together, but now that I have three kids, I’m not golfing as much any more. We love to be on the boat and do some fishing. We love to fish, so that’s something we do together. Away from the game, we can just be brother and brother, and enjoy each other’s company. A lot of times when we talk, it’s not about hockey, but it’s about everything else. That’s enjoyable for us.”

It’s also enjoyable – and never taken for granted by either – to face-off against one another on hockey’s biggest stage.

“We realize how fortunate we are to play in this league and we know how lucky we are to be able to do that together,” said Nick. “I’m proud of how far he’s come in his career and I know he feels the same way about me.

“You talk to a lot of other people that have brothers but are the only that are playing (in the NHL),” he continued. “You realize, ‘Wow, we’re really lucky to be playing in this league.’ My dad is very proud of that fact. Our whole family is. Hockey has been so good to our family, so it’s just been really enjoyable to have a brother to talk to about a lot of those things and go through those experiences together. Whatever I can do to help him, I will. He does the same for me. We just really enjoy cheering each other on.”

Just maybe not on the golf course or a lake.

Who gets first star honours on the links and the waters?

“I’ll give him the hat,” said Nick. “I think he grew up around the lake a little longer than I did.”

Marcus chimed in seconds later, offering his take on which Foligno brother is more talented on the golf course.

“I take that, too,” he said. “I’m sorry. That’s just the way it is. Golfing and fishing require patience and I have more of that than Nick does.”

As for who holds the upper hand on the ice next time, the answer will come on October 14 when the Blue Jackets visit the Wild.